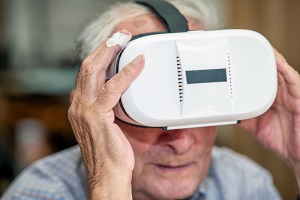 Excelcare’s Essex based care home, Longfield has recently harnessed the power of technology through their arts partnership with curious directive.

In November 2019, Excelcare and intergenerational arts charity, Magic Me started a partnership to bring modern forms of art into care homes and study the benefits this could have on mental and physical health, working alongside Anglia Ruskin University and funded by Paul Hamlyn Foundation.

The early formats of these sessions focussed around members of the arts organisations meeting the residents and getting to know their likes, dislikes and interests. Responses to different activities would then form a basis for the remainder of the project, which each group would deliver in their own unique medium.

Curious directive were partnered with Longfield Care Home, with plans to deliver their sessions using the power of technology. Their first sessions were very successful, and they had many ideas about how they could introduce new technology into the care setting.

One idea that was incredibly well-received was the introduction of VR (Virtual Reality). For the first few sessions, the team from curious directive were supporting people as they got comfortable with wearing the headsets at their own pace. The introduction of VR began before the COVID-19 lockdown placed limitations on who could visit people living in care homes, so the presence of family members and familiar faces also helped to ease feelings of anxiety.

After people were comfortable wearing the headsets, curious directive began to personalise their experiences by asking for places people had previously visited, or places they would like to go. Using these suggestions, they uploaded videos of the locations to the VR headsets, allowing the residents to be transported to their favourite places around the world.

One of the residents requested an air show experience and while wearing the headset, she found herself looking into the sky at all the planes that seemed to be flying above her. It was a wonderful moment that she will always remember. “It was fantastic, just like being there”, she said.