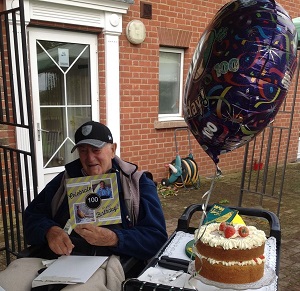 A resident at Saxlingham Hall care home in Saxlingham Green, near Norwich, has marked his 100th birthday with a special celebration at the home.

Herbert Witard has been living at Saxlingham Hall since October 2019 and reached his milestone birthday on Monday 28th September.

Herbert grew up in Norwich, living at the Keir Hardy Hall working men’s’ club, then at the Falcon pub on Aylsham Road, which was run by his parents.

Herbert signed up for the Royal Air Force and during a period of convalescence following an injury, he met a nurse named Mary, who he later married. After his time in the forces, Herbert dedicated his working career to Bally’s shoe factory, where he spent more than 50 years working in the office function for the manufacturer.

His main passion has always been Norwich City Football Club, for which he was a season ticket holder for many years.  He has also enjoyed darts, bowls and tending to his allotment. Herbert has a daughter, Sue and son, Ian, who both live locally.

To mark the occasion, Herbert’s family visited him from a distance whilst observing Covid-19 restrictions.  He also enjoyed a special Norwich City FC themed birthday cake and celebratory tea with his fellow residents.

Home Manager of Saxlingham Hall, Theresa Parfitt said, “Herbert enjoyed a really lovely celebration to mark his special birthday and it was wonderful to be able to share this with him.

“We hope he had a fantastic time, and on behalf of everyone at Saxlingham Hall, I’d like to wish him a very happy birthday.”