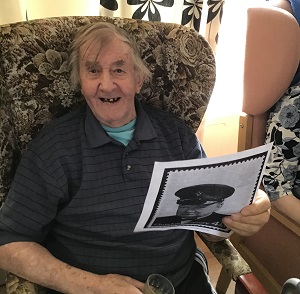 Residents of Watling Court, Dene Holm and Edward Moore House paid tribute to the 75th anniversary of victory in Europe on Friday 8th May.

With slightly different celebrations planned due to the ongoing Coronavirus pandemic, residents of our residential care homes in Northfleet and Gravesend were still able to get into the spirit of VE Day and enjoy some celebratory activities. Whilst those at our extra care housing scheme, Watling Court, were encouraged to wear red, white and blue and were issued ration books for the occasion.

Crafting homemade Union Jack flags, watching old films and singing Vera Lynn songs are just a few of the ways our care home residents celebrated together on Friday. Meanwhile, at Watling Court, residents swapped their ration cards for fish and chips or spam fritters, served in newspaper at the scheme’s restaurant. Staff wore their Sunday best and residents were given cupcakes, adorned with VE Day decorations, made by housing officer, Helen.

In addition, they also reminisced about where they were and what they were doing on that unforgettable day, when Churchill declared war officially over. Over tea, cake and sandwiches, stories were shared, and lockdown almost forgotten, even if just for a while. 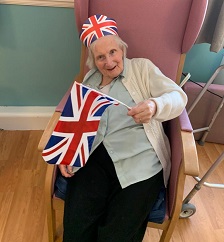 Christine Hutchinson, General Manager for both care homes said: “We’re all making sacrifices ourselves at the moment and during these unprecedented times, it is more important than ever to remember the generation who made the ultimate sacrifice for us, during the Second World War.

Helen Goulding, Housing Officer at Watling Court added: “Whilst the celebrations we all enjoyed today were not what we would have planned if visitors and entertainers could have joined us, they were still very special. It was a very poignant day and the activities certainly lifted everyone’s spirits.”