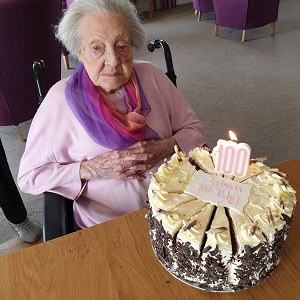 Despite the current pandemic situation and all care homes being in lockdown with relatives unable to visit their loved ones, the team at Community Integrated Care’s, EachStep Blackburn Care Home were determined to celebrate the birthday of their first centenarian resident, Iolanda Cottrell.

Iolanda was born and raised in Crosby, just outside Liverpool, on 5th May 1920. During the Second World War she served in the Mechanised Transport Corps based at the Royal Ordinance Factory in Kirkby, driving ambulances, trucks and motorcycles and was awarded the British Empire Medal.

Towards the end of the war, she was introduced to her future husband, Bill, by a great friend on a blind date and the two couples and their subsequent children became lifelong friends. After their wedding they settled on the Wirral in Merseyside.

Iolanda was a keen golfer and for many years was a member of Wirral Ladies Golf Club. As her health started to deteriorate and she was no longer able to live independently she moved to Lancashire, to live with her daughter and son-in-law in Edgworth. Following the move Iolanda continue to enjoy her golf and became a member of Turton Golf Club, where she made many friends and played until she was 97 years young. She moved into EachStep Blackburn in July 2018. 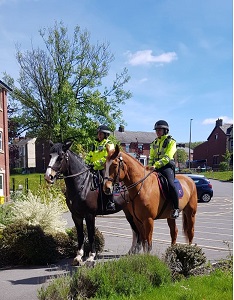 To celebrate Iolanda’s special day the team at EachStep Blackburn decorated the home with banners and balloons and residents and staff were able to enjoy some singing and dancing! No birthday is complete without a birthday cake and everyone took great pleasure in singing ‘Happy Birthday’ to Iolanda on her special day. Iolanda even received a special visit from Blackburn Mounted Police who wanted to congratulate her on her special day! Later there were cupcakes which had been donated by members of the public and birthday cake and celebratory drinks were provided by Iolanda’s family. A beautiful day to remember, despite the current pandemic!

Iolanda’s, family were able to see her on her special day, giving a wave through the window!

Victor Phiri , Manager at EachStep Blackburn Care Home said.
“It was lovely to be able to celebrate Iolanda’s 100th Birthday, which was particularly exciting for the team as Iolanda is the first centenarian we have had in the home.” He continued “We are all working hard at this difficult time to ensure that residents are kept active and entertained during this pandemic. Celebrating birthdays and special events like this are important for the morale of staff, residents, and their families at this difficult time”