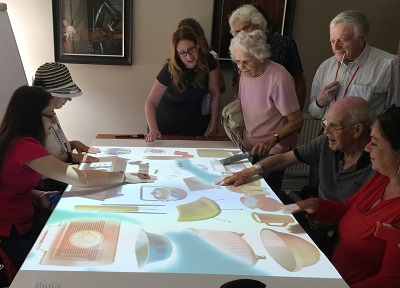 Residents, team members and the local community were thrilled when a generous donation from Dementia Club UK, which is supported by Saracens, led to Carlton Court care home in Barnet being gifted an OM game system, which is an interactive game focused on motion activated sensory technology, as part of the home’s Dementia Club launch.

The Carlton Court team, alongside Councillor Lisa Rutter, the former Mayor of the London Borough of Barnet and Chairman and Founder of Dementia Club UK, also launched a new dementia club at Carlton Court care home as part of their mission to create a vital support system for the local Barnet community.

The regular Dementia Club UK sessions provide an important resource for the loved ones of people living with dementia, enabling them to seek advice and guidance on how best to support them.

The table system is a ground-breaking game which projects images onto a table which are interactive. They include scenes and sounds from nature including therapeutic colouring and relaxing virtual water, songs, interactive quizzes, games and activities to encourage participation which helps residents living with dementia to relax and reminisce. For example, resident Patrick, 88, said some of the scenes on the table allowed him to “reminisce of my years in the service” while Vijaya, 76, used the game to light “many devaas for Divali festival.”

The interactive game sees residents move brightly coloured pictures which are projected from above, enabling residents and families to interact with each other, taking part in different activities, engaging in conversation and reminiscing about favourite memories.

“It has been a privilege to work alongside Councillor Rutter and the Carlton Court team are excited to see the Dementia Club develop as this vital support network at the heart of the Barnet community continues to grow. 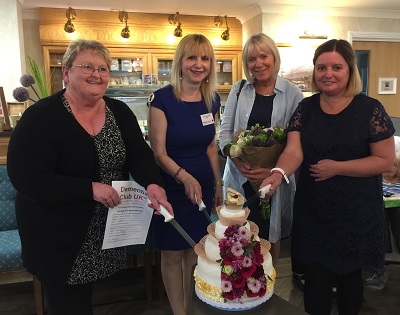 “We would also like to thank Saracens for supporting this generous donation which means that residents with complex dementia needs can take part in ground-breaking activities.”

A representative from Saracens said:

“We’re pleased that this donation has led to a positive impact on the lives of the elderly residents living at Carlton Court.

“Dementia can often be lonely and isolating so we are delighted that we can support initiatives such as Dementia Club UK to help us play our part in tackling the loneliness many feel when faced with a diagnosis of dementia or early signs of memory loss.”

“I am delighted that my charity Dementia Club UK has opened the first dementia club in a care home and also donated an OM interactive game system which would provide hours of fun and joy not only to the residents but also to the carers and families and open to the local Barnet community.”

Carlton Court Care Home is run by TLC Care, a care home group which is committed to delivering care across its homes in a safe, compassionate and responsive way with residents specific and individual needs, preferences and desires at the core.