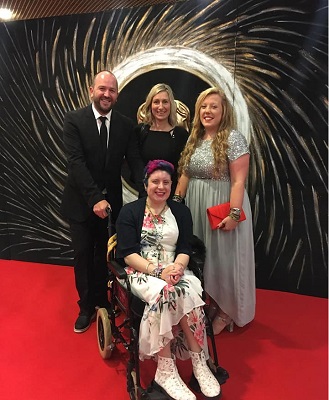 The Incurable Optimist, which aired on BBC 2 Wales in March, tells the story of 24-year-old Amy-Claire Davies who, despite living every day in pain and fear of sudden death, retains overwhelming positivity and hope for the future.

Originally from Swansea, Amy-Claire, who was born with an unknown genetic disease, spent some time during her earlier years at Ty Hafan children’s hospice, where doctors thought she would die, before latterly moving to Lewis Martin Court, Cardiff, where she currently lives. The documentary gives an insight into her optimistic outlook on life living with her complex medical needs.

Speaking after the BAFTA awards ceremony, held at St David’s Hall, Cardiff, Amy-Claire, said: “I am absolutely ecstatic about Team Incurable Optimist’s win at BAFTA Cymru; Mei and Gwen absolutely deserve to have their hard work recognised. They’ve poured their heart and soul into the documentary, and it shows. I’m so proud of their work, and so lucky to be their friend first and foremost.
“We told this story, I told this story, for all the people out there, especially the young adults, who wake up every day and try to get on with living their lives despite knowing that day could be their last.

“I’m delighted that BAFTA Cymru has given recognition to our story, and hope they continue to recognise stories about people with disabilities and especially people under palliative care.
“I’m so grateful to Salutem and Lewis Martin Court for allowing us to film; I couldn’t have told my story without their support. The documentary shows what a truly fantastic place Lewis Martin Court is, and how it’s full of love and care.”

The Incurable Optimist was filmed in and around Cardiff, including at the Salutem Healthcare residential care facility, Lewis Martin Court, where Amy-Claire lives. Lewis Martin Court is a residential care home with nursing for disabled adults who have a range of complex needs and learning difficulties and focuses on supporting residents to build capacity and lives an independently as possible.

The documentary’s director, Mei Williams, was recognised for the project, winning the BAFTA Cymru for Director: Factual at the 2019 BAFTA Cymru awards, announced on 13 October 2019.

Martyn Heginbotham, managing director (south division) at Salutem Healthcare, added: “Amy-Claire has an extraordinary and inspiring story to tell. The documentary was a triumph in highlighting the reality of living with a debilitating condition while living life to the full.”

John Godden, CEO of Salutem Healthcare said: “Amy-Claire is an inspiration to us all. She is able to provide a wonderfully eloquent narrative on how it feels to have reliance on care support. Her words have enabled us to better understand how best to support residents and service users in homes like Lewis Martin Court where the team do an amazing job. A much deserved award for an insightful, brave documentary.”