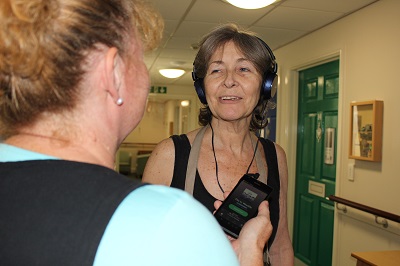 Somerset Care’s Cary Brook is a specialist care home for those living with advanced dementia. Being at the forefront of identifying and adopting forward thinking strategies and technology, Somerset Care supports people to live well with dementia.

Research and evidence suggest the power of music can have a dramatic effect on individuals living with dementia; engaging memories and emotions, leading to the recovery of identities, movement, words and an overall sense of wellbeing. As an established clinical intervention, music supports the psychological, emotional, cognitive, physical, communicative and social needs of people of all ages.

Harnessing the power of music became more widespread at Cary Brook following a Wi-Fi upgrade throughout the home. This revolutionised the way activities co-ordinators were able to use music in a therapeutic, yet structured way; with staff experiencing immediate and enduring results from their innovative use of technology.

The impact was particularly prevalent with one resident, Christine, who was diagnosed with Alzheimer’s disease at the age of 54 and moved to Cary Brook six years later. Being relatively younger than most of the residents at Cary Brook, had an effect on Christine’s mood, lowering her spirits and making her restless and frustrated.

To maintain independence, purpose and meaningful occupation, Christine got involved in practical tasks around the home, like cleaning in the evenings. This helped alleviate restlessness to a certain extent but Christine would still get very tired and irritable from continuously walking about during the day, and found it harder to relax at night.

Being able to access the internet anywhere in the home, has made all the difference to activities co-ordinators using music to reduce Christine’s symptoms of Alzheimer’s. Using an old mobile smart phone, staff created a personalised playlist on a music streaming app for Christine, who now dances around the home singing to Queen and Abba. She also listens to music whilst cleaning in the evening, which helps her to keep on task without disturbing anybody else.

Staff also added ambient music and mindfulness sounds to her playlist, which she listens to in her room, improving relaxation and aiding the process of drifting off to sleep. The effect on Christine’s mood has been profound, and as a result, more personalised playlists have been created on the music streaming app for other residents.

Amanda, one of the activities co-ordinators, is determined to make a playlist for every resident and has put out an appeal for donations of old mobile smart phones. Amanda is also hoping the local sewing group, who has previously visited the home with their crafts, can make small bags for the mobile phones, allowing residents to dance and sing around the home, like Christine.