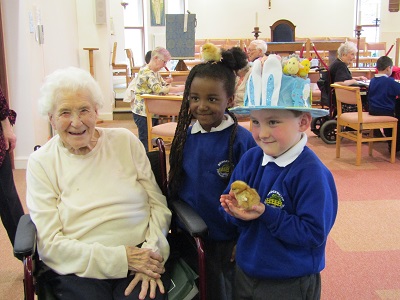 On Friday 30 August, Edna Grant, one of the residents at St. Christopher’s Care Home, in Abington Park Crescent, Northampton, celebrated her 100th Birthday.

Edna is the third residents at St. Christopher’s to celebrate a 100th Birthday this year, and she has been living at the Home for just over three years.

Born and brought up in South Wales, where he Mother, Gladys was a District Nurse and her Father, George, was a miner. She had one brother and one sister.

Edna has spoken of a particular favourite toy she had one Christmas as a child, a doll and of how she had to do chores to earn pocket money which she spent on sweets. Favourite holidays was going by bus to the seaside at Barry Island.

Schooldays are not spoken of favourably at all, she says “the teachers were horrible and strict, I mostly enjoyed play time” !

Her working life was mainly spent as a Shop Manageress and Accounts Administrator.

She was in her twenties when she first met her husband in the 1930’s, when she was working for the then UK’s largest retail chain, Home & Colonial Store. They were married on 12 March 1940, when Edna was 22, at a church in Wales, and she remembers wearing a blue suit.

They set up home in Coventry and her daughter Sue was born at Henley-in-Arden, in Warwickshire.

Edna has spoken of her very favourite music being that of the wartime American bandleader, Glenn Miller.

Daughter Sue and her immediate family arranged a birthday party in the St. Christopher’s Summerhouse to celebrate.

Manager of St. Christopher’s, Sarah Clarke said of Edna, “I have a particular recent memory of Edna and her taking part in our Book End Project with Bridgewater Primary School. She enjoyed every moment for each of the six weeks the project ran, and the company of the children, her face was just full of smiles each and every week”.

Edna is the third of five St. Christopher’s residents due to celebrate their 100th Birthdays during 2019.