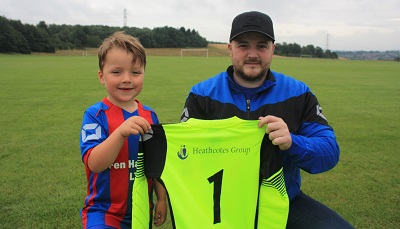 Ossett-based Thornes Juniors Football Club has set up a new Under 6s team for the upcoming season with help from care provider, Heathcotes Group.

Coach Liam Wilson is a care support worker and team leader at Alverthorpe House, one of six residential care services in Wakefield which Heathcotes provides to support adults with learning disabilities and mental health needs.

Seeking to raise the funds for the kit and equipment needed for the team to play and train, Liam approached his employer to request sponsorship and Heathcotes was happy to oblige. The company’s logo is now displayed on the new shirt as the team prepares for its inaugural season in the Charles Rice Junior and Minor Football League.
Liam said:
“Thornes Juniors FC is a non-profit organisation run for children in the Wakefield area. Our footballing policy aims to enable local children and families to access grassroots football at an affordable price. The club relies on sponsorships and donations to provide football kits and relevant gear for the children who join, so we are very grateful for Heathcotes’ support. The players love their new kit and we can’t wait for the new season to start. We are always on the lookout for new players and we would welcome any children who might be interested in joining the new team.”

Heathcotes Managing Director, Brendan Kelly, said:
“Clubs like Thornes Juniors are the heart and soul of grassroots football. They depend on people like Liam dedicating their spare time to give children the opportunity to play and, when Liam got in touch, it was an easy decision to back his new team. We were delighted to hear that the club also runs a team for children with learning disabilities, which is fantastic from our point of view, as a care provider that supports both adults and children with learning disabilities. We wish Liam and the team the best of luck for their first season and we will be keeping a keen interest in their results!”

The new Under 6s side will be the youngest and newest of 15 teams at Thornes Juniors FC, which runs various ages groups up to Under 17s. Currently comprising over 200 junior players in total, the club was formed in 1990 to provide football for boys and girls of all ages and abilities. Based off Queens Drive, the club is seeking new players for its 28th season and families are invited to get in touch via its website.