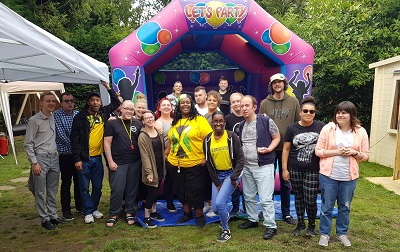 Several staff are proud to have Jamaican roots and the occasion was a lively celebration of the island’s vibrant culture and the 57th anniversary of its independence from the United Kingdom. The event also provided an opportunity to give service users a greater understanding of ethnic diversity. A bouncy castle was hired for the day, the sound system played reggae and a barbecue grilled some delicious treats, including a generous serving of Jamaica’s most famous dish, spicy jerk chicken. Heathcotes Erdington is a specialist residential service for adults with learning disabilities who may also have dual diagnoses and associated complex needs.

“Jamaican Independence Day is always a significant date for the members of the Erdington support team who have Jamaican families and it was great fun to join in their celebration. The service users really enjoyed themselves and it was a chance for them to learn more about the country’s rich heritage, from food to music.”

Diversity is an important aspect of life at Heathcotes Erdington. The service often organises in events celebrating the LGBT community, including a recent party to coincide with Birmingham Pride earlier in the summer. Following the success of their Caribbean party, Jamaican Independence Day looks set to be another regular date in Heathcotes Erdington’s social calendar.