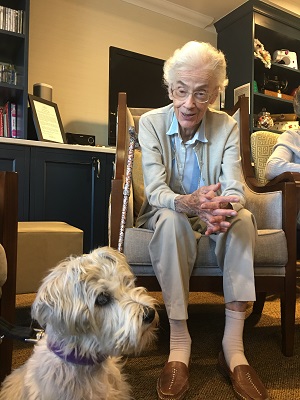 The care community decided to use the day, which is celebrated every year on 21 September to raise awareness and highlight the issues faced by people living with dementia, to focus on the benefits of animal interaction for older people.

The day included a visit from the dog team at Foal Farm in Biggin Hill, including all three of their canine members. Mogi, a pug who is in a wheelchair due to difficulties with his back legs, Hank, another pug, and Toby all spent the day interacting with the residents in Sunrise’s activities room, alongside a delicious buffet lunch.

The care team at Sunrise of Banstead decided to raise awareness of the merits of animal interaction as it has been shown to lower anxiety and release an automatic relaxation response, which is particularly pertinent for those living with dementia. Animal interaction can also stimulate spontaneous communication, increase mental stimulation including the increased production of serotonin, prolactin and oxytocin, which all help to boost mood. 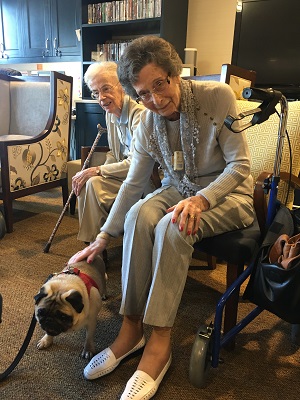 “I thoroughly enjoyed the afternoon with all the little dogs, it was lovely.”

“We wanted to do something special to mark World Alzheimer’s Day and this was a great way to get involved with the campaign and offer a beneficial activity to our residents.

“We chose to focus on animal therapy with dogs specifically as they are very affectionate, and residents really enjoyed getting to know our guests. We look forward to offering similar initiatives in the near future at Sunrise of Banstead.”