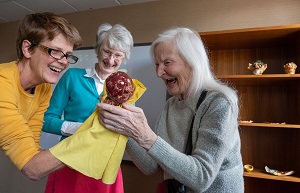 A pioneering pilot study exploring the impact of creative workshops on those living with dementia at Belong Crewe care village has proved a huge success, with the findings being evaluated by the Centre for Collaborative Innovation in Dementia at Liverpool John Moores University to assess how the arts can be effectively embedded into other care environments.

Launched in January, the pilot marks the first phase of Belong’s unique three-year research project with Liverpool’s centre for the contemporary arts, Bluecoat. As part of the collaboration, named ‘Where the Arts Belong’, Bluecoat commissioned six critically acclaimed artists, with many years of nationally recognised practice between them, to work in ‘residency’ at the care village. Here, they engaged residents, family members and support teams in a bespoke six-month art programme, boasting over 70 different workshops ranging from storytelling and sculpture to music and dance.

Evaluation of the residences so far show that these experimental initiatives are improving the lives of the individuals involved, especially those living with dementia. Early results include high participation, enhanced cognitive capacity and an increased sense of community amongst previously isolated individuals.

The resounding success of the first stage of the project was captured at a celebratory event at Belong. Here, the findings were showcased alongside an impressive art exhibition, produced by participants, ranging from clay cabbage leaf plates to multimedia works exploring the diverse perspectives of people living with dementia. These research insights will inform future practice at the care operator’s upcoming state-of-the art villages in Birkdale and Chester, which are due to open next year, and will be the first to have permanent staff trained in specialist arts provision.

Belong Deputy Chief Executive, Tracy Paine, said: “We are thrilled with the outcomes of the pilot study, which are making a real contribution to best practice in this area. The next stage of the project will see the ‘artist in residency’ scheme implemented at our new care villages, helping our customers live happier and more enriched lives.”

Laura Yates, Acting Head of Participation at Bluecoat, added: “The artist workshops have had an incredible impact on the residents and their families, providing a valuable tool to unlock memories and aid cognitive function. We look forward to building on these creative initiatives with Belong in the future to further improve the lives of those with dementia.”

Members of the public are invited to take part in a series of outreach art workshops, which will take place at The Atkinson in Southport, from October.