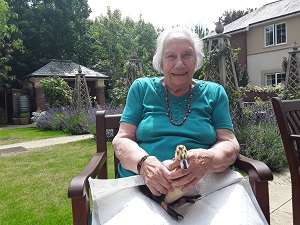 Elderly residents at a Salisbury care home have gone quackers over their new found feathered friends.

Four delightful Indian Runner ducks with individual, distinctive markings have been born at Braemar Lodge which is run by Colten Care and the residents couldn’t be happier.

Companionship Team Leader Jo Hanson explained the duck eggs she bought were placed in an incubator and residents waited patiently for the ducklings to appear.

“Everyone has been captivated by the ducks including residents, staff and their families.
“The first one started to hatch 27 days after we first incubated them and the rest followed. They really are very cute,” said Jo.

As well as being a positive distraction, the ducks are also proving to be a great source of conversation.

Jo said: “They loved seeing new life coming into the world. It gave us all something to focus on from the time they were in the incubator, when they hatched and now as they are growing up.”

Residents and staff had great fun naming the ducks. All their ideas went into a hat and the resulting names that were drawn now mean their new found friends are known as Scramble, Mopsy, Freda and Omelette.

Stella Parsons is pictured with Freda and Jo explained having the ducks around has brought back memories of growing up on a farm for her and several other residents.

An outside enclosure for the ducks is being built in the orchard at Braemar Lodge and they will even have their own care plan.

“The ducks have been a constant source of joy and amusement for residents, staff and all their families,” added Jo.