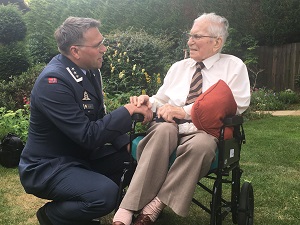 On 10th July, George W. Hockney BEM, a resident of Park House Nursing Home in Peterborough, was the subject of a very special presentation, held by Defence Attaché Colonel John Andreas Olsen from the Norwegian Embassy.

A Norwegian Commemorative Medal has been presented to George, 100, in honour of the role he played in the Norwegian Campaign, which was the first Allied sea, air and land campaign of World War II. As the 80th anniversary of the Norway Campaign approaches, the presentation recognises the service George and his comrades provided whilst on board HMS Auckland.

The presentation came as a result of the personal efforts of Tim Kundu, a historian and lecturer who has been campaigning for greater recognition of the role of the British Armed Forces in the Norway Campaign. Having met George and his son Michael to discuss the Campaign, Tim contacted the Norwegian Embassy and was thrilled that they agreed to hold this special presentation to honour the services Mr Hockney gave in Alesund, Namsos and Andalsnes.

George, who was born in Peterborough in 1919, joined the Royal Navy as an engineer and travelled the world. His naval career earned him a number of prestigious medals including the British Empire Medal, 3945 Star, Africa Star, Burma Star, Palestine Medal, Malta Medal, War Medal and Defence Medal.

Members of Peterborough’s Royal Naval Association attended the celebratory event to recognise and thank George for his dedicated service to the Navy.

Talking about the presentation, George Hockey said: “I vividly remember my days in the Royal Navy and was very surprised to hear that the Norwegian Embassy wanted to meet me. I feel very proud to receive the medal on behalf of all my comrades; it’s an honour and a privilege. Thank you to Tim Kundu who made this happen.”

Historian and lecturer Tim Kundu has been campaigning for better recognition of Britain’s role in the Norway Campaign and was delighted to receive acknowledgment from the Norwegian Embassy, as he explains: “During a post graduate research degree I studied British wartime strategies between 1939 and 1940 and was asked to give a lecture on the Norwegian Campaign. It was here that I became fascinated by the subject, however at each major anniversary of World War II, I noticed no major commemorative service was held to mark the first air, sea and land campaign of the War that took place in Norway.

“I felt that the servicemen should be honoured, so took it upon myself to find veterans who had been involved. I feel privileged to have traced and met Mr Hockney – I have had such a wonderful time interviewing him about his experiences. His recollections are so fresh and vivid and he enabled me to learn so much more about the Norwegian Campaign. Mr Hockney is a truly outstanding and remarkable person; his wonderful nature, inner strength and fine sense of humour have made a profound impression on me.

“I believe firmly that all the British veterans of the Norwegian Campaign and their comrades should be honoured officially and that their role in World War Two deserves to be widely acknowledged in Britain. Congratulations to George on receiving the well-deserved medal and recognition – I am overjoyed at this outcome.”

Added Mungwaluku Mupatu, Park House Nursing Home’s manager, “Today has been a day of absolute celebration and we are all very happy and proud of George. He thoroughly deserves all the recognition he has received for what he did in the Royal Navy all those years ago. He is very happy to today accept the medal on behalf of all those that played a role in this monumental campaign.” 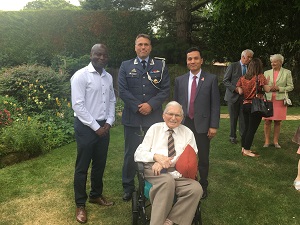 Britain, the Norwegian Campaign and Mr George Hockney – by Tim Kundu:
“I am currently carrying out research on Britain’s role in the Norwegian Campaign (1940) and making preparations to launch a campaign aimed at obtaining official recognition of the role British veterans and their comrades played in Norway in 1940. As part of my preparations I have made efforts to find, meet and interview British veterans who served in Norway nearly eighty years ago.

On Wednesday, 26 June I had the great honour to meet Mr George Hockney, the Royal Navy veteran, who participated in the Norwegian Campaign. He served on board HMS Auckland and Mr Hockney was an engine room artificer.

In mid-April 1940 his ship left Invergordon in Scotland and journeyed to Norway. It transported Royal Marines to Alesund and then took French troops to Namsos. Mr Hockney went ashore at Namsos and saw the heavy devastation that resulted from heavy German air attacks against the town.

Afterwards, HMS Auckland provided anti-aircraft gun cover at Andalsnes against the German Stukas and Heinkel bombers, and in early May 1940 it evacuated 240 British troops and officers from Andalsnes – they boarded the ship in seven minutes.

The Auckland was the last Royal Navy vessel to leave Andalsnes. Mr Hockney and the crew on board the Auckland had played a most honourable role in assisting Norway in its fight for freedom and it was through their efforts that 240 British soldiers managed to leave Andalsnes and avoid captivity at the hands of the Germans.

Mr George Hockney is a truly outstanding and remarkable person. His wonderful nature, inner strength and fine sense of humour have made a profound impression on me. His recollections of the events in Norway are most vivid and he enabled me to learn so much more about the Norwegian Campaign.

I believe firmly that all the British veterans of the Norwegian Campaign and their comrades should be honoured officially and that their role in World War Two deserves to be widely acknowledged in Britain. Mr Hockney’s son, Michael, was present during my meeting with George Hockney, and Michael provided excellent support. I asked them if it would be fine for me to approach the Norwegian Embassy and request the Norwegian authorities to award a medal to George for his noble service in Norway. I then contacted the Norwegian Embassy about this matter and less than a week later the Embassy informed me that the Norwegians would like to award the Commemorative Medal to George Hockney. I was overjoyed with this outcome.”