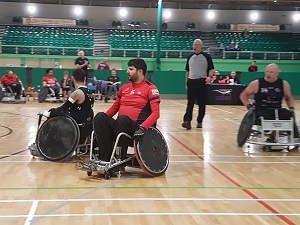 A Poole man who suffers from a rare degenerative disease has thanked Shaw healthcare staff for helping him take part in a UK-wide wheelchair rugby tournament.

Phil Porter, 31, recently travelled to Stoke Mandeville Stadium in Aylesbury – birthplace of the Paralympic Games – to compete in the first of three tournaments that will make up the 2019 Wheelchair Rugby Summer League. The league consists of 16 teams, competing in two divisions in the 5-a-side version of the sport. Porter and his team-mates from Bournemouth Lions played in the Premier Division of the competition, finishing the weekend in fourth position.

Mr Porter, who has lived at the Shaw healthcare-owned Trinidad Village extra care centre since 2018, was diagnosed with Becker muscular dystrophy when he was 16. The condition, which affects less than 2,500 people in the UK, causes muscle degeneration and leaves many reliant on wheelchairs and other mobility aids. A keen rugby fan, Mr Porter had previously played amateur rugby but his worsening condition had limited his ability to play and travel, having a significant impact on his mental health.

Recognising this, staff at Trinidad Village supported Phil to attend and take part in the tournament to, staff provided care and support for him during the two-day event. The Summer League resumes in July with the finals scheduled for 31st August.

He said: “I’m so grateful to everyone at Trinidad Village for their help in getting me to the tournament. Without their efforts, I would have never made it to the event and have the opportunity to play against the very best teams in UK wheelchair rugby.

“Not being able to play sports had a substantial impact on my mental health, making me a lot more introverted as a result. After playing in the tournament I feel a lot more like my old self, and I’m already looking forward to joining the Bournemouth Lions for more matches in the future.”

Tina Vincent, manager at Trinidad Village, added: “Since joining us, Phil’s determination to fight his condition has been evident, but our team could see that his difficulties getting in and out of his car and wheelchair was getting him down. It’s well-known that physical exercise has strong links to positive mental health, so we liaised with Phil and the Bournemouth Lions and worked to ensure he had the support and help needed to take part in the event and has also paved the way for future events to be accessible.

“Going above and beyond for our residents is key to our ethos at Trinidad Village, so I am glad that Phil enjoyed his experience with the team.”