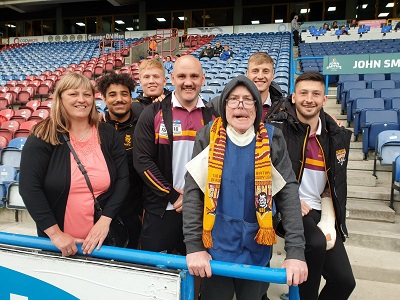 A LIFELONG fan of the Huddersfield Giants rugby club was given a dream chance to see his team play from pitch side seats.

The care home has been working with the trust’s National Citizen Service (NCS), hosting young volunteers for their community projects.

During their visits to the home, they discovered Alan was a lifelong fan of the club, so offered tickets to say thank you.

Alan, who has a brain injury that makes communicating difficult, was taken to the game by Aden House Care Home carer Mandy Lang.

Mandy came back to Huddersfield from her holiday in Primrose Valley, near Filey, specifically to take Alan, before returning to her family on the coast.

She also bought him a scarf and shirt to wear on the night.

The close-fought match, which saw the Giants come out on top 30-22, brought a tear to his eye from the excitement.

Mandy said: “We didn’t know which game it was going to be. When the tickets arrived, we found out it was on Friday evening, when I was on holiday with my family.

“I promised Alan I would take him to the game to see his beloved team, so I came back for the night and returned to my family the following day.

“Alan has no known family and his brain injury means communicating with him can be difficult, but he fully understood where he was going and had the most amazing time, with tears in his eyes as he couldn’t contain his excitement.

“We’d like to say a massive thank you to the Huddersfield Giants and their community trust for making Alan’s dream come true.”