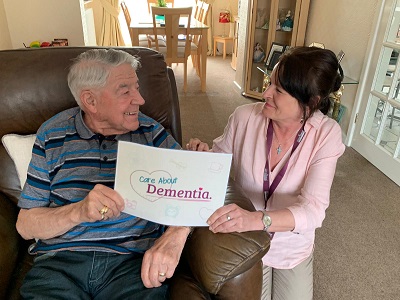 A home care company has launched a campaign to raise awareness of dementia to thousands of people UK wide.

‘Care About Dementia’ is Home Instead Senior Care’s campaign kicking off during the Alzheimer’s Society’s Dementia Action Week in May. As part of the week, which runs from May 20th-May 26th, Home Instead CAREGivers will be sharing caring advice and tips to help people with dementia to live well.

The campaign is just one of the steps the home care company takes to raise awareness of dementia, a disease affecting more than 850,000 people in the UK.

In the last year, more than 1,100 Home Instead CAREGivers have been trained in City & Guilds accredited dementia awareness.

Martin Jones, managing director of Home Instead Senior said: “Almost all of us know someone affected by dementia and so we all have a reason to take action and learn more about it. Care About Dementia is all about sharing information and useful information with the public if they are caring for a family member, friend or relative with dementia.

“With so many of our elderly clients affected by dementia, our CAREGivers are passionate about helping them to live well and have so much advice to share. The more we talk about dementia, the more we can all learn how to help people living with it.”

Home Instead CAREGiver Fran Shaw said: “My tip I gained from a family member who lived with dementia towards the end of her life, was not to correct her when she told you the same story or asked the same question a number of times. It’s about being patient and even if you feel frustrated at the time, put a smile on your face and let them know you are listening and are interested in what they have to say.”

Emma Bould, Programme Partnerships Manager at Alzheimer’s Society said: “In the UK, one person develops dementia every three minutes. But despite almost all of us knowing someone affected, too many report feeling isolated and lonely. Alzheimer’s Society is determined to make sure no-one with dementia has to face a future alone. It’s fantastic to see that Home Instead is backing Dementia Action Week. There are small acts of kindness that everyone can do, to make sure everyone with dementia is included in society and supported to live the lives they choose.”