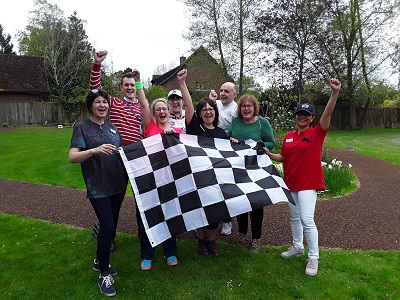 Residents and staff at a New Forest residential and nursing home turned their garden path into a marathon route for a fun community get-together.

Runners, walkers and wheelchair users at Woodpeckers in Brockenhurst were joined by village schoolchildren to complete a distance of just over 52 miles, equating to two marathons.

Ahead of the big day, staff measured the length of the looping path as 65 yards, meaning 27 laps would clock up a mile and 710 laps would equal the full marathon distance.

They laid out route markers, a refreshment pit stop and got ready with a chequered race flag.

In the end, so many people took part that the event extended across two days as a ‘double marathon’.

Jane Bunker, one of the home’s Companionship Team Members, said: “We thought we would just have fun trying to complete one marathon, but we had so much response from the local community we managed to do two. Everyone said it was such a great idea.” 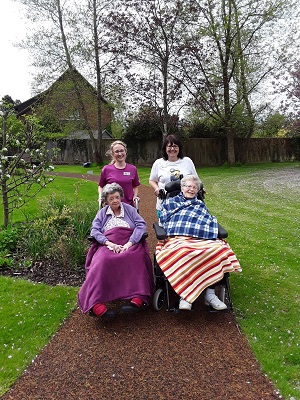 Alison Dixon, whose mother Daphne Davidson is a Woodpeckers resident, said: “It was lovely to see everyone going out into the beautiful garden, enjoy the fresh air and have some exercise too.”
Resident Philippa Conway said: “We had a super time and there were so many people involved.”
As well as residents, who were all wrapped up well in their wheelchairs, participants from the home included chefs, waitresses, housekeepers, healthcare assistants and companions.

Home Manager Katie Whiteside, who also took part, said: “This was a prime example of generations coming together to have great fun. There were big smiles all round and we will definitely be doing it again.”