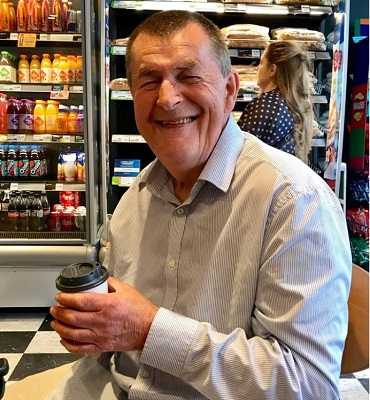 A care home resident has paid tribute to Carlton Court care home in Barnet, after the team helped him to pay his respects to his late mother, who’s grave he had previously been unable to visit.

Derek Morgan (70), who grew up in Northern Ireland before moving to London in 1973, hasn’t visited his mother’s grave since his move to London due to the distance and cost of travel.

After telling Carlton Court staff how distressing it has been to not be able to pay tribute to his mother in his hometown, and how much he missed his childhood home, the care home’s Wellbeing Lead, Steven Millar, decided something had to be done.

With the help of Nurse Dee Osbourne, Steven immediately booked Derek a return flight to Belfast.

Upon arrival, Derek was taken to pick out his mother’s favourite flowers, before visiting the grave of his parents, Lilly and Frazier and paying his respects. He was then taken to his old local pub where Derek was reunited with his brother Paul and had a catch-up over a pint while they reminisced about their childhood.

The trip ended with an emotional visit to Derek’s childhood home, where he was given a selection of photos of his mother and siblings to hang in his room at Carlton Court. 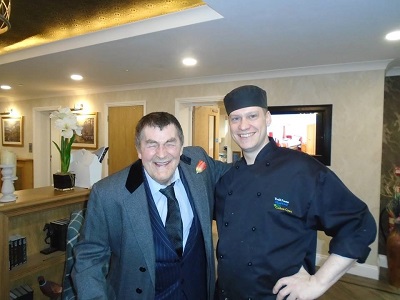 Upon arriving back in England, Dee helped Derek plant flowers in the care home’s garden, as a permanent memorial to his mother.

Derek Morgan said:
“Not being able to visit my mum’s grave was one of my biggest regrets. I’m so grateful to Steven, Dee and everyone at Carlton Court for helping me change this. It was an emotional day, but also made me very happy to see my old home and finally catch-up with my brother.

“Planting the flowers in the garden was such a nice touch. It’s as though my mum lives on and I can visit her everyday”.

Steven Millar, Wellbeing Lead at Carlton Court said:
“When I heard Derek’s story I knew we had to do something and I’m really happy we pulled it off!

“It was so nice to see him reconnect with his brother and hear their stories about growing up in Belfast. Derek and his brother now talk more regularly and you can really see the change in Derek now. He’s so much happier and always smiling. Thanks to all the staff at Carlton Court for helping us make his dream come true”.

Carlton Court is part of the TLC Care group which provides specialist nursing and residential care homes in London, Hertfordshire, Surrey and Cambridge.