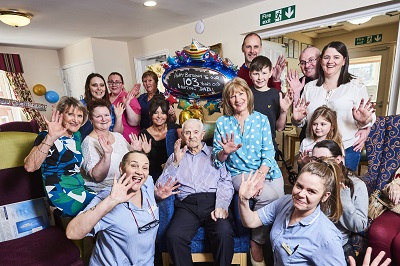 A popular resident at a Shropshire care home has celebrated his 103rd birthday in style.

Local-born Stanley Saxon celebrated his milestone birthday with a sing-a-long with his family and friends at Myford House Nursing Home in Telford.

The great-grandfather of six’s 103rd birthday came nine years after, when at the age of 94, Stanley decided to enter Britain’s Got Talent – singing ‘My Way’ and wowing the judges. He got through to the second round in London.

Throughout the decades Stanley would perform three times a week in local pubs around Telford and has treaded the boards at the Birmingham’s NEC and at the city’s Hippodrome.

He still sings to this day and due to his love of music the care home planned a karaoke party for him with his friends and family.

He also loves sport and when he was younger he competed in track cycling events, becoming British champion in 1935 over a mile. He was also a football referee up to the age of 70 and played bowls until he was 90.

Debbie Pugh, care home manager at Myford House, said: “We are delighted Stanley had such a fabulous birthday and it was an honour to be part of something so special.

“Stanley has been at the home since December 2018 and is a really popular resident. He always has a smile and brightens everyone’s day.”