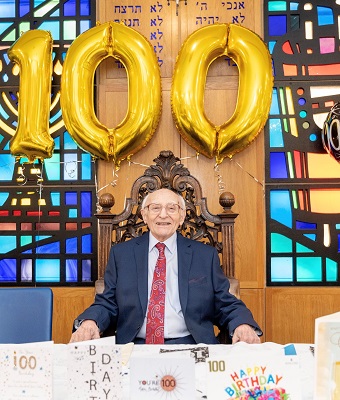 Born 2 March 2019, Joseph Winton (Weissberg), recently celebrated his 100th birthday together with three generations of his family. Joseph’s daughter Daniella, and his grandchildren Gideon, 20, Natalie 18 and Benjamin 13, who just celebrated his Barmitzvah attended the party along with nine members of his family, including nephews and nieces, who flew in from Israel and Belgium. They were joined at the party by staff, volunteers and fellow residents at Jewish Care’s Lady Sarah Cohen House.

After the party, Joseph said, “I had a brilliant 100th birthday party, it went off very well indeed. Of course, I knew I was going to be 100 for quite some time now and I feel very comfortable with that and the fact that I am being so well looked after. I am a very fortunate and lucky man. It was such a pleasure to look around and see all these friendly faces, I am really touched that so many people found time to come and wish me good luck and congratulations!”

Joseph has lived through two World Wars. His mother, Yiska and father, Shlomo Weissberg, a tailor and a Cohen, escaped Lodz, Poland in 1920 with Joseph who was one year old and his sister, Rosette, who was three and a half. His brother, Jacques, was born three years later in Brussels.

They lived happily in Brussels until, in World War II, when the Nazi’s invaded Belgium, Joseph’s sister joined the Underground whilst Joseph and Jacques fled the country. They hid on a train for nine days and nights surviving on food passed through the windows before arriving in Toulouse, France. They were then able to hide on a transatlantic ship, helped by an officer in the Polish Army, boarding the ship without knowing their destination.

They arrived in Plymouth, travelling by train to London and were taken to Chelsea Barracks where they were interviewed by Scotland Yard, before being released and made their way to relatives in the East End. Joseph joined the Royal Army Ordinance Core, making the most of his communication skills in German, French and Flemish. Joseph’s brother, Jacques joined the Belgium Army and his brother in law, also Joseph, joined the French Army and miraculously they all survived the War. 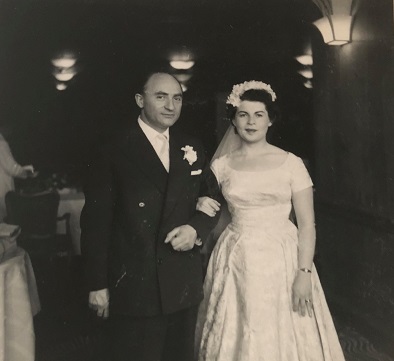 From there, Joseph, changed his name from Weissberg to Winton and started in business as an agent for a French Ladies Designer Fashion house called Desarbre and then ran a business selling unique Trefousse leather gloves, which were supplied to Her Majesty the Queen.

He met Ann Ahuva Armon in 1957, who was living in Israel then, but had grown up in Manchester. Marrying on 20th March 1957, soon after they met, they were together for 59 years. They lived in St Johns Wood, moving in 1960 to Fitzalan Road in Finchley where they had Philip in 1961 and Daniella in 1965. When Daniella had children Joseph became a hands on grandpa.

Ann moved to Lady Sarah Cohen House in 2005, where he would visit and spend most of the day with her, every day, dividing his time between his wife and his grandchildren, until Ann sadly passed away in February 2016. After Ann’s passing Joseph spent his days at Jewish Care’s Michael Sobell Community Centre in Golders Green where he made many new friends and enjoyed the activities. Joseph has been living at Lady Sarah Cohen House since June 2017 and was driving up until he was 97. 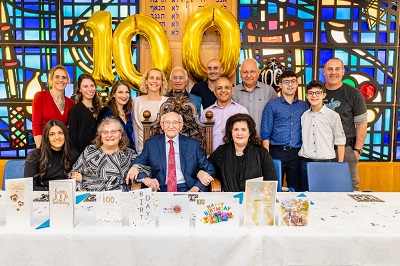 Speaking at his 100th birthday celebration, his family said, “We feel very blessed that our loving father, grandfather and uncle has now turned 100 years old. He has been looking forward to receiving the telegram from the Queen for as long as we can remember and was truly thrilled to be presented with the card by the Queen’s Deputy Lieutenant, at the wonderful party that was held in his honour at Jewish Care’s Lady Sarah Cohen house. It was a fantastic occasion and will remain a very special memory for us all.”