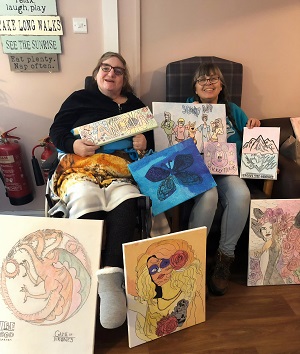 The discovery at work of an unexpected outlet for a 54-year-old care worker’s dormant artistic talents, has led to a rewarding side-line producing pet portraits for colleagues and friends who admire what she has done at a supported living service in Ceredigion, Wales, for people with learning difficulties and mental health issues.

When Bev Holczman started working at Caeronnen, a Llangrannog-based service run by the Regard Group, she was happy to say ‘yes’ when tenant Angela Hurrell asked if she could draw something for her.

“As soon as she gets used to you, Angela always asks people if they can draw because she loves colouring in. She’s very good at it.

“It started with me just drawing one or two sketches with a bold outline for her use, but 18 months on we now have a huge collection of canvases, many of which adorn the walls at Caeronnen. There are so many we need to rotate them!”

The outlines Bev was drawing for Angela started to attract compliments from her colleagues, which encouraged her to do some art on her own at home.

Bev said: “I started by painting a picture of our beloved cat who had passed away the previous year at the ripe old age of 21. It was a kind of tribute to her. I really enjoyed doing it, and my partner commented on how good it was.

“That inspired me to carry on and I have since produced quite a number of paintings, mainly of pets. I have recently delivered two separate portraits of dogs that I was commissioned to do, and I have two more in the pipeline – another dog and a parrot.

“Angela loves what we do together. She mainly uses colouring pencils or felt-tips, but she enjoys other craft activities as well such as collage.

“We also support Angela to attend HUTS in Newcastle Emlyn every week which is a craft workshop for people with mental health concerns and learning difficulties.

“Helping the people we support to live rewarding lives is a crucial part of what we do. For us it’s all about ensuring they get as much out of life as they possibly can and making the most of all avenues available to them.

“For Angela it’s art. For another individual it might be nature. We provide access to a wide range of interests at an appropriate level and support them to make personal choices that will make them happy.”

Bev says she’s thoroughly enjoying her job at Caeronnen which started in January 2018 when she relocated from South Wales to West Wales. She had spent the previous 18 months working in social care, before which she had spent 12 years as a teaching assistant, providing one-to-one support for pupils with special needs.