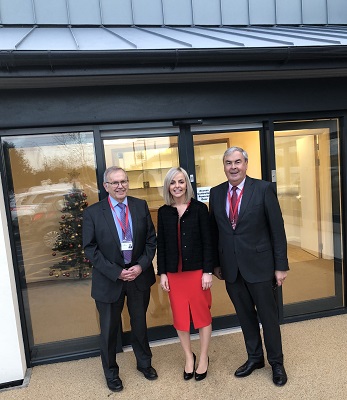 A new specialist dementia unit, Murray House, has officially opened in Kelso thanks to a £4 million fundraising campaign and a £2.1 million finance package from Royal Bank of Scotland.

The 18-bed state-of-the-art facility is situated on land adjacent to Queen’s House care home, which owns and operates the purpose-built unit. It is to be followed by the completion of a further 9-bed unit, Evanthea House, which will be ready for occupation in the spring of 2019.

Both Murray House and Evanthea House will be centres of excellence for people living with dementia in the Scottish borders and will create 60 new jobs for Kelso and the surrounding community.

Queen’s House Kelso was first established in 1954 to provide residential care for the elderly, with a newer facility opened in 2001 by HRH The Princess Royal. Now, the launch of Murray House will further enhance the level of care Queen’s House can offer and will address the acute shortage of specialist dementia care in Kelso.

Ray Jones, Chairman of Queen’s House Care Home, said: “We are extremely proud to officially open the doors of Murray House, our new specialist dementia care facility.  Queen’s House was created to deliver exceptional standards of care to the elderly residents in the town of Kelso and beyond in an environment that’s comfortable, safe, homely and happy.

“Dementia affects around one in six people over 80 in Scotland and, with the launch of Murray House, residents in the Scottish Borders living with the illness won’t need to travel further afield for specialist dementia care.

“The Trustees of Queen’s House are incredibly grateful to Royal Bank of Scotland for its financial support and a very generous individual who has provided a considerable donation. This has been supplemented by substantial backing from The Robertson Trust, The Wolfson Foundation, Life Changes Trust and The Mustard Seed Foundation, as well as valuable contributions by a number of local charitable trusts and individuals. This support has helped the Trustees to create a state-of-the-art unit which will provide a positive impact on the health and wellbeing of residents in the Borders.”

Karis Marinello, Senior Relationship Manager at Royal Bank of Scotland, said: “It’s important for those living with dementia to be surrounded by people they love, in the community where they’ve grown up, and Murray House and Evanthea House will enable the elderly residents in the Scottish Borders to access specialist, first-class care locally.  It will deliver significant benefits, not just for those using the facility, but for their families and the local community, with the creation of new jobs for the town of Kelso.”