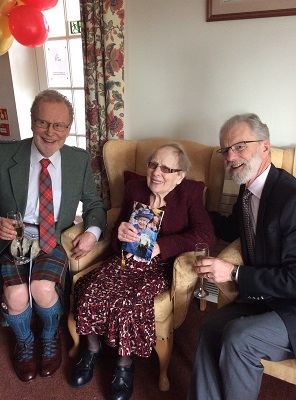 A resident at The Old Vicarage care home in Leigh, Sherborne, has celebrated her 100th birthday. Ada Fraser marked the milestone occasion earlier this month, and celebrated with family and friends.

Ada was born in 1919 in Kilchoan, Ardnamurchan, which is the westernmost point of the British mainland. She was the youngest of four; having two sisters, as well as an older brother who sadly died from diphtheria before she knew him.

Ada attended Kincraig Primary School and Kingussie Secondary School, where she was the Dux (top student). She went to Edinburgh University, something unusual for the time, where she gained a degree in English and Latin before becoming a teacher. She taught at Lockerbie Academy where she met her husband, Wilson.

Ada married Wilson in 1948 and raised two sons, Stuart and Donald. She returned to teaching and became Deputy Headmistress.

Ada sadly lost Wilson to illness in 1975, and after her 80th birthday she moved nearer to her younger son in London. In 2004 she moved with him again to Dorchester, before relocating to her current home at The Old Vicarage in Leigh.

With family in the Highlands, Somerset, Dorset and Canada, Ada has always enjoyed her travels. She loved to be out in the fresh air, walking with family and her beloved dogs, and instead now enjoys riding in a convertible car, feeling the wind in her hair.

Ada celebrated her milestone birthday surrounded by her family, friends and relatives. A special cake was made for her and she received a card from Her Majesty the Queen.

Home Manager Louise Turner said, “It was wonderful to celebrate Ada’s birthday, seeing her surrounded by her loved ones. She is such a lovely lady, with a fascinating history and career, we all enjoy hearing about her past.

“On behalf of everyone at the Old Vicarage, I would like to wish Ada a very happy 100th birthday.”