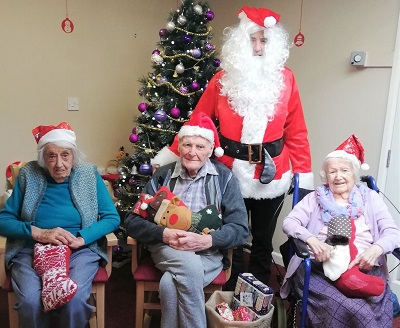 Residents at The Gables care home in Gorleston have been reminiscing about Christmases of yesteryear, as part of special festive celebrations organised by staff. With three residents aged 100 and over, the home asked for their recollections and favourite memories of bygone Christmases to bring a touch of nostalgia to the home.

Manager Chris Chambers and his team decided to get residents involved with Christmas at the home this year by asking them for their memories of Christmases gone by.
In particular, resident Fred – who celebrates his 107th birthday on 19th December – was born in the Rows in Great Yarmouth, before moving to Gorleston. Fred remembers a very happy childhood and especially enjoyed Christmas. His stockings were often his dad’s old socks, which were filled with nuts, apples and oranges, or a sugar mouse if he was lucky. His family didn’t have much, so their neighbours often helped and would give their leftovers and spare toys to help them enjoy Christmas. When he was older he went to Woolworths and bought his mum a nice vase – one of the first new things she ever owned.

103-year-old Dorothy, who grew up in Surrey recalled the huge Christmas tree they had at home, with baubles that would often smash. She remembered having a stocking at the end of her bed and fondly speaks about carol singing, when she would have sweets and hot chocolate at the houses she visited.

103-year-old Nellie grew up in Lowestoft and remembers receiving nuts, an orange and an apple in her stocking, as well as a present at breakfast time on Christmas day. Her Christmases were often white and she used to love ploughing through the snow to go Christmas shopping.

Manager Chris Chambers said, “Having heard these wonderful memories of Christmas over the years from our residents, I really wanted to do something to bring these to life for them to enjoy this year.

“All three of our oldest residents mentioned stockings being a treasured part of Christmas, so at this year’s Christmas party, we presented every resident with a stocking of their own, each containing fruit, nuts and puzzles.

“Many of our residents also talk about carol singing being a key part of Christmas, so we sang carols together and reminisced about our favourite Christmas songs.

“Friends and relatives joined us and it was a wonderful way to create a truly festive atmosphere for everyone at the home. Being able to help Fred celebrate his 107 years has also made this Christmastime extra special.”