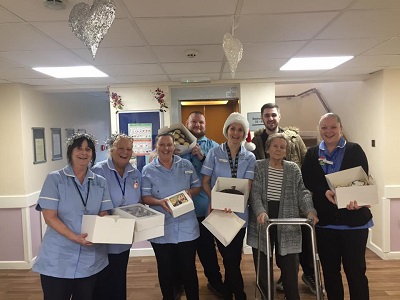 A surprise delivery of cakes was dropped off at an Ellesmere Port care home after they won a competition.

The specialist dessert shop ran a competition on Facebook asking fans of their page to name a care home they wanted to win.

Over 400 comments were made and Aaron Court Care Home received the most nominations.

Lindsey Bevan, home manager at Aaron Court Care Home, said: “There were loads of nominations for local care homes who all do an amazing job but we were delighted to win.

“It was such a lovely and totally unexpected surprise when the cakes arrived.

“We would like to say a huge thank you to everyone who nominated the home and to TJ’s Dessert Bar for the most wonderful cakes. They were absolutely delicious.”