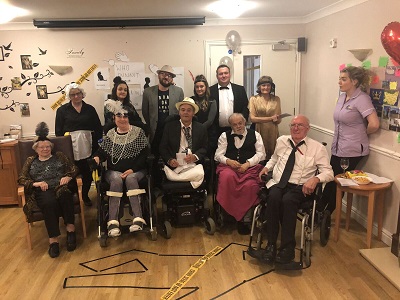 Residents and staff at Handford House care home in Ipswich have been playing detectives at a Murder Mystery event, held at the home.

The team hosted a special ‘Murder in the Manor’ evening, inviting residents, friends and relatives to join them for food, drink and entertainment, working together to solve clues and discover who murdered ‘Ginger Whiskers’.

Several members of the team attended, playing suspects and dropping clues whilst helping the participants to investigate ‘who dunnit?’. Residents played out the storyline as characters such as gangster ‘Knuckles Malone’, played by resident Graham, before it was revealed that resident Sam, playing ‘Halliday Inn’ was the culprit.

Home Manager Mike Parris said, “We had such a great time at our murder mystery evening. All the residents that took part really got into character and played along, so it was full of comedy and suspense as we worked to find out who was behind the murder. 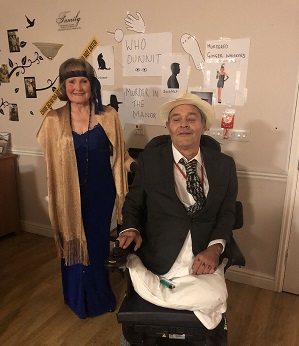 “Seeing our residents having fun and doing something totally out of the ordinary is fantastic and is everything we’re about at Handford House. This is a happy place, full of laughter, and we’re always keen to see the new ideas that our activities pro Kelly has planned for everyone at the home.”

The evening was part of a wide range of events and activities arranged at the home by activities coordinator Kelly McLaughlin. Residents are regularly asked for their input on the events and opportunities provided for them and Kelly and Activities Assistant Maria Castello work to provide a varied mix of opportunities all throughout the year.