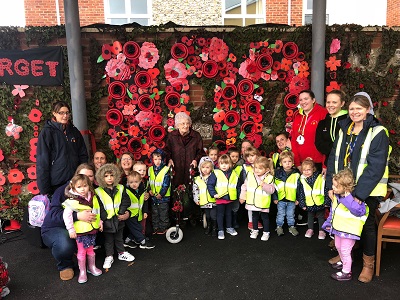 vonbourne Care Centre in Wiltshire, operated by The Orders of St John Care Trust, hosted the unveiling of a poppy wall on its premises on the 9th of November after a 2-minute silence. The unveiling ribbon was cut by 107-year-old resident, Phyllis Hayley, who has lived through two world wars. She said: “We must never forget.”

The poppies had all been handmade (from paper, clay to knitting) with over 500 created. They were displayed in the shape of 100 and the remaining poppies flowed out of the 100 to represent the 100th Anniversary of armistice day.

The poppies were made by residents, local organisations (the local children’s nursery and the girl guides) and members of the community. Help the Heroes actively supported and worked with the residents to help 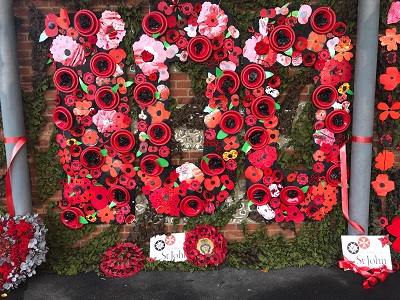 Peter Bartlett, Avonbourne General Manager, comments: “We have had amazing community involvement in the making of the poppies. Including beneficiaries of Help for Heroes who came in and worked with our residents. It was a great day and many stories were shared. The smiles on our residents’ faces said it all and what was a truly wonderful day.”

The local Old Sarum nursery school attended two poppy and coffee mornings at the home, where residents helped the children make poppies. The Trust has also received a very large donation of poppies from the local Girl Guide Rainbows.

In addition, relatives, staff and individuals from the local community contributed by making poppies at home. Our initial aim was to have 500 poppies, but we have surpassed this with all the support we have gratefully received.

Help for Heros, the nursery school, members of the community and OSJCT members and Avonbourne employees were present at the unveiling. Matt Levinson from St Francis Church conducted a reading prior to the 2-minute silence.