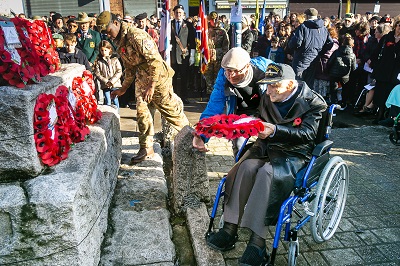 Residents of Jewish Care homes attended the wreath-laying ceremony at the Edgware cenotaph yesterday on Remembrance Sunday. Cecil Hearne 94, who is a resident at Jewish Care’s Lady Sarah Cohen House in Friern Barnet, laid the wreath on behalf of Jewish Care. The ceremony was also attended by the Deputy Lieutenant of Barnet, Sheila Gewolb LD and Reverand Sally Bailey of St Margarets Church, AJEX, Scouts and guides, army cadets, Hebrew Order of David and members of the local community.

Cecil Hearne was part of the Fleet Arm Regiment and served 19 years in the Royal Navy and 10 years in the US Navy. He was a full commander on USS Saratoga super carrier and was responsible for 3500 people. Cecil said he “felt immensely proud to represent Jewish Care.”

Monty Leslar, who attends Jewish Care’s Singing for Memory group at Jewish Care’s Michael Sobell Community Centre in Golders Green, joined the Royal Air Force during the Second World War and was assigned the role of maintaining the aircrafts.

He says “I have always been proud of my service to my country. I often show photos from my time in the RAF with my children and grandchildren and it was such an important time for me.”

After the Remembrance Sunday service residents together with Rev Sally Bailey of St Margaret’s Church in Edgware attended the ceremony and Deputy Lieutenant, Sheila Gewolb, travelled back to Jewish Care’s Clore Manor care home in Hendon to enjoy lunch, sponsored by the Hebrew Order of David. They listened to music from Rabbi Lionel Rosenfeld and the Shabbaton Choir.

Jewish Care’s Chief Executive, Daniel Carmel Brown said, “So many members of our community are ex-servicemen and women have played important roles over the last century. Hearing their stories and the courage they showed during difficult times is inspirational. Yesterday was another opportunity to thank them and to honour and remember those who sadly, over the years, have lost their lives.”