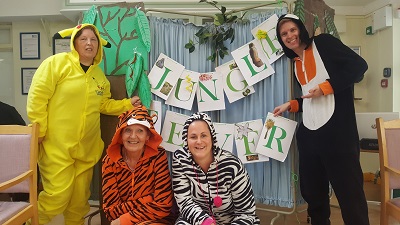 Residents at a specialist dementia care home in Wellington, Somerset, have been transported to the fantasy realm of ‘Camazon’ with a jungle-themed experience day organised by their enterprising activities team.

Arts and crafts sessions in the run-up to the big day helped residents of Camelot House and Lodge get in the mood by involving them in the creation of colourful banners and a rainforest back-drop.

Activities organiser, Richard Dempslake, said: “The decorations lent a real air of adventure to the residents’ lounge, and we also delighted them by bringing in extra props such as binoculars and bananas – for the monkeys of course.”

Richard and colleagues Kathy Burge, Carol Binding, Jenna Gale put in hours of rehearsal to produce a musical and comedy performance that had residents singing along and chuckling at the puns and jokes.

The performance started with a narrator telling the story of an imaginary jungle, the Camazon, and went on to describe all the ‘creatures’ that live there, including ‘care-ante-lopes,’ ‘laund-ra-flies,’ ‘domes-ta-flies,’ ‘kitchen birds,’ ‘maintenance apes,’ ‘nurse-a-phants‘ and ‘office bears.’

Multiple costume changes matched a variety of well-known jungle-themed songs such as The lion sleeps tonight from the film The Lion King, Hey, hey we’re the monkees from the hit sixties TV show The Monkees, and perennial favourites such as Karma chameleon, Eye of the tiger and Day-O (the banana boat song).

Themed refreshments were served in the intervals, including a fruit platter and cups of jungle punch.

Richard Dempslake said: “I’m very proud of the way the activities team got into character and were so creative around our jungle theme.

“We managed to incorporate chair exercising into the entertainment so the residents could join in, and they thoroughly enjoyed themselves.

“We’re already planning our next performance, with ideas including a pirate show and country line dancing.”