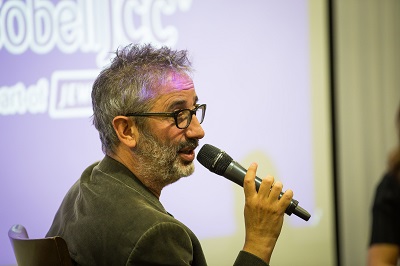 All topics were up for discussion with David Baddiel who chatted to interviewer Kate Fulton on Thursday 18 October with an audience of  200 people at Jewish Care’s Michael Sobell Community Centre. The writer and comedian shared experiences of growing up in North West London going on to talk about his career in comedy from The Mary Whitehouse Experience to Fantasy Football and his pride in writing the chart topping, Three Lions football anthem with Frank Skinner. He explained why he engages with trolls who he sees as ‘hecklers’ of the Internet and how he is enjoying touring his show as well as writing and performing comedy.

Talking about his touring show, My Family: Not the Sit Com, he told the audience, “Being able to talk a lot to make people laugh is a brilliant job. I never think it’s good to sweep things under the carpet and I find it it’s more difficult not to talk about things and not to express my emotions. So, when my Dad got the diagnosis of Pick’s Disease and I was told that he had dementia I found the best way to process it was to talk about and in my case to make comedy out of it.

He was invited to speak to help raise funds for Jewish Care’s Michael Sobell Jewish Community Centre at the Maurice and Vivienne Wohl Campus in Golders Green by his cousin, Michael Radbil, who is Chair of the Centre’s Voluntary Advisory Committee.

The comedian explained, “I think being Jewish is all about family, tradition and comedy,” later adding, “I spoke this evening because Michael Radbill, my cousin, asked me to and because I enjoy a chat. Jewish Care does a lot of fantastic work with people who need support in the community.”

Last year, over 130,000 visits by were made by older members of the community to Jewish Care’s six community and day centres across London and the South East. The centres provide meaningful activities, a place to socialise and enjoy what might be the only hot meal of the day for older people, 90% of whom live alone and would otherwise be lonely and isolated.

Activities at the Michael Sobell Jewish Community Centre includes exercise classes, discussion groups, bridge, music and reading appreciation as well as facilities at the larger centres including art studios, a therapy suite, a beauty salon and Explore technology centre. Members can also stock up at the shop and have enjoy a meal in the Kosher milk and meat restaurants. At all Jewish Care Community Centres there is a team of staff and volunteers who are on hand to encourage and enable members to engage and socialise.

Michael Radbil, who made an appeal, told the audience that last week, The Prime Minister launched the Government’s first ever loneliness strategy:  stating that “loneliness is one of the greatest public health challenges of our time and that around 200,000 older people have not had a conversation with a friend or relative in more than a month.” The strategy refers to activities such as cookery classes, walking clubs and art groups as ways of improving quality of life.

He continued by saying; “It may not surprise those of you who know this centre that government advisors visited here a few months ago to see first-hand the impact of our work and understand more about how best to prevent to alleviate social isolation and loneliness.”

Each month we have over 2000 visits from older members of the community to our Day Programme at the Michael Sobell Community Centre with a whole range of activities to choose from.

“Every one of these people brings something unique to our Centre and we strive to ensure that each one of them is empowered to live the way they want through our network of support. Our aim is to continue to make a positive difference to their lives especially as for so many of them we are their family. All this comes at a price. Members pay a nominal charge to attend and we therefore run at a substantial deficit, so we really appreciate the support tonight of David Baddiel, Kate Fulton and all our guests this evening for helping us to raise £6000 for the Centre.”