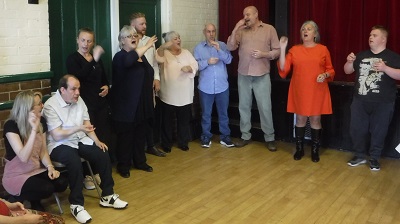 A Shrewsbury-based choir whose performances focus on signing rather than singing is appealing for an invitation to perform in front of a new audience in the region.

Kim Walshaw, a qualified Makaton trainer who works as locality manager for care-provider Regard and has launched a ‘signing choir’ for colleagues and the people they support, said: “You only have to watch our choir to see how much the members love what they are doing, and their performances spread such joy.

“We’d love people to contact us with suggestions for inclusive local events where they would like us to perform.”

Makaton is a language programme that uses signs and symbols to help people communicate. It is designed to support spoken language, so the signs and symbols are always accompanied by the spoken (or sung) words and not used as replacements.

Kim Walshaw said: “Our Makaton choir is fully inclusive of people with all abilities-friendly choir whose focus is having fun and feeling fully empowered.

“It’s well known that singing is good for you but combining signing with singing enriches the whole thing.

“When we sing along to the music and sign simultaneously we are expressing our personalities and showing how we feel – all with our hands – and it’s a tremendously rewarding experience.”

Kim started the choir last spring. Their first performance was at the ‘Celebration Of Success’ evening organised by Regard as a platform for recognising the achievements of the people with learning difficulties, mental health needs and autism they support in the Shrewsbury area.

The song of the night was Christina Perri’s A thousand years, (see https://vimeo.com/278641135/af231b5d2d ) which earned rapturous applause, and the evening’s awards included certificates and gifts for every choir member.

At their follow-up performance – a charity tea-party raising funds for Shelter – they “brought the house down” with their rendition of This is me from the hit film The Greatest Showman.

Charlotte Turner, deputy service manager for Merrington Grange, where some of the choir members live, said: “Kim seems to have started something unstoppable. Choir members can’t get enough of it and are also enjoying new friendships made within the group.

“We’re always sensitive to individual needs – for example Matty, one of the young men we support, finds performing in front of an audience a real challenge and even though he wants to join in, it makes him anxious.

“We solve this by having me sit right in front of him – facing him so that he can focus on my familiar face – and this enables him to perform with minimum stress. He’s always so delighted with himself when he’s finished – it’s just great to see what a sense of achievement signing with the choir gives him.”

The Makaton Choir is currently practising new songs for a planned Halloween event, including the classic Diana Ross and The Supremes hit Stop in the name of love and Reach (for the stars) by S Club 7.