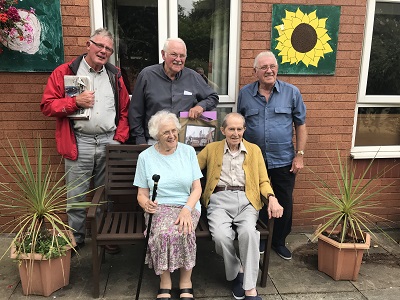 CHESTER historian and Honorary Freeman of the Borough Len Morgan was treated to a trip down memory lane by a local history group.

They brought a collection of Len’s work, pulled together from their archives, as well as books he co-authored, such as Chester Through Time from 2010.

Now 85 years old, Len has been a member of the group for over 30 years and was still able to recall a lot of his work and the history of Chester and Ellesmere Port.

He talked about one of his photos of a child sat on a frozen River Dee in Chester in 1962-63 – recalling how brave the child must have been.

Len has spent most of his life establishing and curating a vast collection of thousands of photographs of Chester through the years.

He has presented numerous slideshows, walks, tours and written newspaper columns – extolling his passion for the city’s historical heritage.

Before leaving, Len presented a book to the group’s chairman Neville Shallcross, which Len received in 1970, so it could be returned to the author for safe keeping.

Len’s son Dave said: “Len was a bit nervous about meeting the group again but was able to recall a lot of his work and the history of the area.”

Lindsey Bevan, home manager at Aaron Court Care Home, on Princes Road, said: “Len has been with us since February this year and has already had a huge impact on all our other residents and staff.

“He is one of the loveliest gentlemen you will ever meet and a bit of a local celebrity due to his extraordinary work on the history of Chester.

“His vast collection of photographs, books, newspaper articles and more is hugely impressive and we wanted to take the opportunity to invite his former history group to the home.

“Len’s son Paul helped us arrange the visit and as soon as they arrived his passion for the city shone through and he was telling stories from the past like he was still giving tours.”