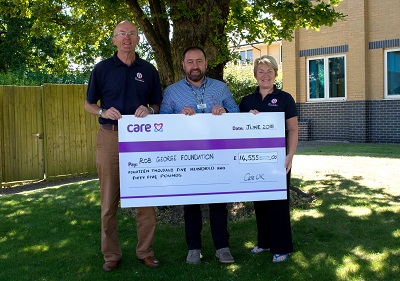 A Care UK regional facilities manager, praised by colleagues for his determination in ensuring residents’ wellbeing, presented money he raised – by racing in a 300 mile Arctic Ultra race in temperatures as low as minus 54 degrees – to a charity supporting young people.

The race, the Yukon Arctic Ultra, was a gruelling trek in the depths of the Canadian winter, which left Nick Griffiths with fourth degree frostbite. The damage led to the loss of three toes, which he now has in his bedside cabinet as he plans to recycle them.

The 46-year-old father of two, from Bolton, spent five days receiving cutting edge treatment in a Canadian intensive care unit before returning to the UK, where he has been treated by the burns unit team at Wythenshawe Hospital in Manchester.

Nick raised £9,555 for the Colchester based Rob George Foundation, and Care UK’s Wellbeing Foundation added an additional £5,000 as a special to donation to its charity of the year.  The £9,555 included many donations from Nick’s Care UK colleagues and suppliers to the care home provider as well as his family and friends.

The former Royal Marine, who had trained and prepared fully for the race, was no stranger to endurance events, having completed the 3,000-mile Talisker Transatlantic Rowing Challenge in 2013.

Nick said: “The Yukon race was a gruelling adventure, but it was wonderful to be able to hand over the cheque to a charity that does such brilliant work providing support to young people with life threatening or terminal illnesses, and supporting those who show exceptional commitment and ability in the worlds of sport or the performing arts.

“I am grateful to my family for their support in my recovery and to Care UK for the £5,000 donation to the fundraising total.”

Praising Nick’s dedication, Care UK’s head of facilities management Kevin Orme said: “Nick has a great reputation across the business in supporting our care homes by always putting the needs of our residents first.

“He is a very caring person, so it wasn’t a surprise when he told us he would like to raise money for the Rob George Foundation and we were delighted to be able to support him in his epic journey.”

Philip and Lorraine George, Rob’s parents and trustees of the foundation, said:

“We have been so touched that Nick chose to support the Rob George Foundation, citing his keenness to support us because he wanted to help young people to pursue their love of sporting activities, something so dear to his heart.

To put Nick’s outstanding achievement into perspective, the funds raised from his amazing adventure will provide grants for around 20 deserving young people across the UK and we can’t thank him enough.”

The foundation was set up in memory of Rob George who died in 2013, aged just 21, following a long and courageous battle with leukaemia.  Rob was a talented local sportsman and he was determined that the Foundation should “make a difference – one individual at a time” by providing practical and/or financial support to young people with life threatening or terminal illness, and young people who demonstrate exceptional commitment and/or ability in the worlds of sport or the performing arts.

For more information about the work of the Rob George Foundation, visit www.therobgeorgefoundation.org