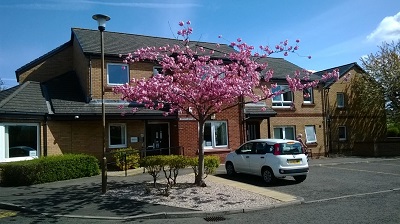 TENANTS at a retirement housing development in Muirhouse are set to tackle the history of Scottish dialects as part of a series of events held by the local Reminiscence Group.

Organised by The Living Memory Association (LMA), tenants at Bield’s Brookwell Court will test their strength in Scottish dialects as they take part in a group reading of Scottish books and literature.

Led by Scottish dialect expert John McCaughie, the session will take place on Wednesday 9th May at the development.

Jan Chapman, Retirement Housing Manager at Brookwell Court, said: “I was approached by Miles Tubb from The Little Shop of Memory in Ocean Terminal asking if I would be interested in setting up a local reminiscence group for our tenants and other members of the community as part of the LMA.

“I thought it was an incredible idea and something that our tenants would definitely enjoy.

“The principle of bringing people together through memory sharing, discussing the past and exploring the changes that have occurred over the years really resonated with me. I find that each session is as fascinating as the previous one.”

Established just over a year ago, the group aims to bring people together by digging up memories and taking a nostalgic look back at past events.

As part of a schedule of activities, including a fashion slideshow and a presentation of individuals’ memorabilia, tenants also recently had their knowledge on old Edinburgh put to the test as they attempted to match archived photographs of the capital with current locations.

Jan added: “Tenants love sharing their old photographs with the group, some of them dating back to the 50s.

“We have had people bring so many interesting items such as magazines, records, old packaging, photocopies of their photographs, railway badges and tickets, and so much more.

“All of these items present such a fascinating look at the past. It is always intriguing to explore how things have changed over the years, whether it’s fashion, home interiors or food packaging.”

Last month, tenants were also involved in an initiative organised by Urban Union to collect memorabilia from the local community. Items were added to a time capsule which has been buried in the foundations the new Pennywell Living development.

Jan said: “It felt really nice to be involved in such a captivating event. It is fascinating to think about what will happen if someone digs the time capsule up in about a 100 years and what they will think of it.

“The items that our tenants brought differed from those of the local primary school. There was a clear distinction between the generations, the old and the new, but all of the items are a part of our history.”

The Living Memory Association believes that through stimulating social interaction and communication, reminiscence activities can assist in reducing the feeling of isolation, especially amongst the older members of the community.

For more information on The Living Memory Association, visit www.livingmemory.org.uk