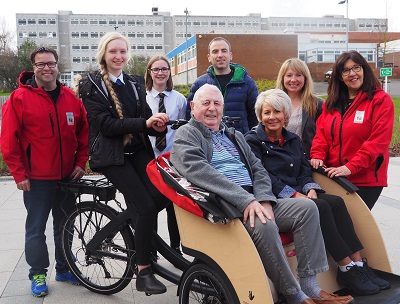 AN 81-year-old Perthshire pensioner has teamed up with his local school and council to help older people get back on their bikes.

Mr Norman Ridley, a former Salvation Army Officer who resides at Bield’s Quayside Court in Perth, has joined forces with Perth High School and Perth and Kinross Council to bring Cycling Without Age to the area.

Founded in 2012 by Ole Kassow, Cycling without Age is a project which aims to help elderly people who have limited mobility get back on their bikes and enjoy the fresh air.

Making use of trishaws, volunteers will offer free bike rides to local tenants and those who have reduced mobility.

Already a successful global venture, the scheme has taken off in countries such as New Zealand and Chile, as well as in founding country Denmark.

First launched in Scotland in Falkirk in 2016, Norman is hoping that Perth can follow suit and benefit from the scheme.

He said: “I got involved with Cycling Without Age after seeing an advert in the paper. Pupils at the school had suggested it as a project for The Duke of Edinburgh’s Award.

“I thought it was a fantastic idea, allowing older people the chance to get out and about and see the area.

“The trishaws are all ridden by volunteers who have given up their time to get older people out and discovering the area’s beauty spots.

“We went down to see it all in action in Falkirk and it has been a great success. Hopefully it will take off the same way in Perth.”

Although still set to launch, members of the community have already taken Perth’s trishaw for a spin, with three tenants christening the bike between 20-22nd April.

Norman added: “We had three tenants go out on the bike last weekend to celebrate their birthdays.

“On the Sunday we had the provost come down to visit a tenant who was celebrating turning 100 years old. He was delivering the telegram from the Queen.

“I think he was pretty impressed with it all. We only have one bike just now but there is definitely a need for a few more.

“Giving older people the opportunity to enjoy the fresh air and take in the views at areas such as North Inch can really make a difference to their wellbeing.

“Those who would like to get involved can volunteer a little of their time to help get older members of the community out and enjoying beautiful Perth.”

“Coming together like this will have benefits on so many levels. The tenants will experience the thrill of getting out in the great outdoors, feeling the wind in their hair and accessing parts of the local area they may not have seen in a long time whilst the pupils and trishaw pilots learn about the rich history of the area from the people who experienced it first-hand.

“New friendships are created and invaluable inter-generational bridges built in the heart of our communities. Everyone has much to gain from this simple yet powerful experience in the trishaw.”

Cycling Without Age is set to launch in Perth on Saturday 19th May. More information on the initiative can be found at www.cyclingwithoutage.org

Watch how Cycling Without Age began: