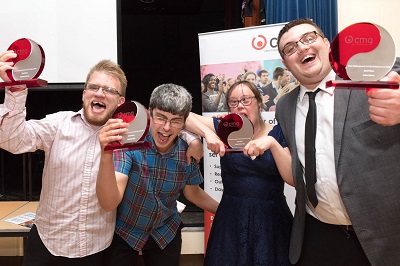 CMG has celebrated the success of some of the most inspirational people it supports, at its prestigious Annual Achievement Award ceremony this week.

The special ceremony, which took place at Imber Court Sports and Social Club in East Moseley, celebrated some of the most remarkable and inspiring stories and achievements which have emerged across CMG’s services over the last year.

44 individuals that CMG supports were presented with awards at the ceremony, with some of the categories including Best Achievement in Education; Best Achievement in Paid or Voluntary Employment; Most Inspirational Individual or Group, Excellence in Promoting Social Inclusion and Most Inspiring Health Outcomes, to name only a few. The prestigious awards were presented by David Spruzen, Chairman of CMG.

The afternoon began with welcome drinks for guests to enjoy, before Chief Executive of CMG, Peter Kinsey, gave a presentation to the guests, with a tailored slide for every person who had been nominated for an award, showcasing their individual achievement.

Guests then enjoyed a three-course meal ahead of the award-giving, before the ceremony was brought to a close by DJ JC, an individual CMG supports, who provided a disco.

One service user won 3rd place in the Most Inspirational Person category, after facing a difficult year following the loss of a close family member in the year. Despite this, the individual carried on with such bravery and positivity, and has been supporting her family whilst dealing with her own grief, in a very inspirational way. As a way to overcome her grief, she choreographed her own dance, which she performed at her service and at the British Got Talent auditions.

Another special moment at the event in particular was when a service user who usually finds new, loud and busy places overwhelming, conquered his fears by walking up on to the stage to receive his award. This was achieved as a result of his dedicated support workers and the Registered Manager who had been working closely with him over the past few months, practicing collecting arriving at the venue and collecting the award.

Another service user was awarded 1st place in the Best Achievement in Education category, after attending college regularly and passing her Maths GCSE, which has been a long-term goal and will help her to progress further.

“CMG’s Annual Achievement Award ceremony is always a brilliant opportunity to celebrate, recognise and showcase the incredible achievements and progress made by so many of the individuals we support. This year’s event was incredibly special, and I know that all guests took great inspiration from the stories that were shared.

“We are hugely proud of all the nominee’s and award winners – their achievements and successes are so well deserved, and really are a testament to themselves and their commitment, as well as the support they have around them, helping them to achieve their goals and full potential.”