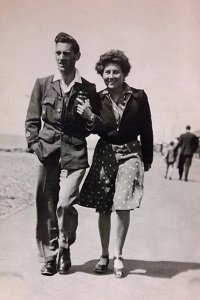 Today,1st April 2018, the RAF will celebrate 100 years since its formation. The Royal Star & Garter Homes, a Charity that provides specialist care for veterans and their partners who live with disability or dementia, has been privileged to care for many RAF veterans in its 102-year history. Once such resident is Second World War Spitfire pilot Phillip Johnson. To commemorate the RAF centenary, here we share his incredible story.

Phillip joined the RAF on his 18th birthday and underwent the demanding Spitfire pilot training in the UK, Africa and Egypt. Once his training was complete Phillip was flown to Malta and joined 185 Squadron.

In 1944, 185 Squadron moved to Italy, and operated as a fighter-bomber unit supporting the Allied advance up the length of Italy. Phillip explains, “The Army would tell us where German tanks were holding them up. Our job was to destroy the German Army as best we could so the British Army could move on. It was critical work.” 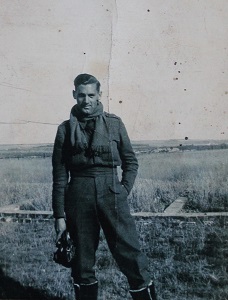 Phillip remembers one occasion when his plane was struck by enemy fire, “There was a lot of flak coming from the ground. We swooped in, attacked the tanks and made towards the sea.  When I landed, I noticed there was a great big hole in the rear of my plane. It would have been a very different story if it had hit me or the fuel tank.”

In early 1945, Phillip was posted back to the UK and joined 174 Squadron whose objective was to help with the air offensive over Germany. The aircraft flown by 174 Squadron was the Hawker Typhoon, meaning Phillip had to re-train.

Typhoon engines were noted for being ‘temperamental’, something Phillip experienced, “On one flight, the engine cut out. I had to find a landing place pretty quickly. I glided down to land in a large field. I got it down alright but broke the aircraft’s back. It caught fire and I got out quickly!” When Phillip returned back to the station, the Squadron Leader ordered him to be back up flying again in two hours’ time. Phillip explains, “That was deliberate. It didn’t give me time to think about what went wrong.”

Not only did the RAF provide Phillip with adventure and camaraderie, it was where he met his future wife, Doreen, who was a mechanic in the WAAF: “As soon as I saw her I knew straight away she was the girl for me.” Phillip and Doreen shared a happy 66 years of marriage together. 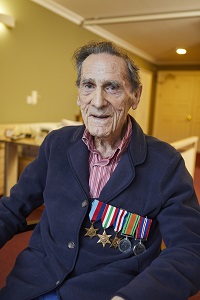 Phillip came to The Royal Star & Garter Homes in June 2017 shortly before his 94th birthday after he finally began finding it difficult living on his own at the family home. In November, during the Remembrance Day commemorative Service held at the Home, Phillip wore his medals for the first time in his life. The Charity’s emphasis on being part of a military family helps many veterans to reconnect with their military past and comrades that were so important to them during their service.

When reflecting on his time in the RAF, Phillip remains very modest about his actions. “It was just part of the career. It’s what we had to do, so we just did it.”