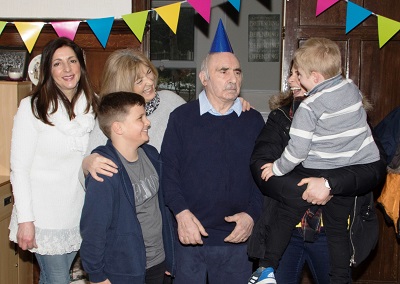 Four generations came together at a party organised by staff at the home on High Street, Irchester, including Oscar the Dalmatian.  Gino, from Barton Seagrave, developed his love of wine as a young man in Montelanico, a small village near Rome in Italy, and he decided to make his own when he moved to the UK in 1953.

“Dad was well-known in our area for the gallons and gallons he used to produce!” said his daughter, Angela Payne.  “He grew loads of vegetables in the back garden and he had vines as well.  But he had to import grapes from Italy because he couldn’t grow enough himself!

“The neighbours were regularly invited in to sample his latest vintage and would come out a couple of hours later rather wobbly on their feet!”

Gino followed his uncle, who’d been a prisoner of war in the UK, to Northamptonshire to work in agriculture as the post-war farming effort intensified.  He returned home briefly to get married and later went to work for Alumasc in Burton Latimer, making metal barrels for the drinks industry.  He retired from the factory in the 1990s.

Gino moved into The Cottage on High Street two years ago after his dementia made living at home too challenging.  The home offers high quality, dignified nursing and dementia care for 53 people.

Manager, Felicity Bucknall-Hart, says the party was an opportunity for Gino to spend time with his beloved great-grandsons, Freddie who’s eight and Stanley aged four.

“Although Gino’s ability to communicate is very limited we know how much his family means to him,” she said.  “Our care here is all about understanding who each of our residents is and tailoring what we do to them.  Gino loves to be outside and we let him dig in the vegetable patch with our gardener when we can – he feels he’s still working and that’s really important for his wellbeing.”

The birthday party included a special lunch, a birthday cake and, of course, Italian red wine. Angela says the staff were “absolutely wonderful”.

“They clearly love my dad.  It’s hard not to – he’s quite a character and still has a twinkle in his eye!  We’re very grateful to Felicity and the team for helping to create these lovely memories.  Cheers!”