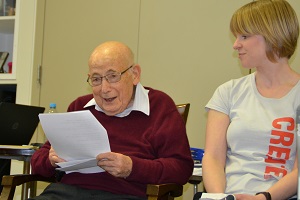 A paper by Marcus Rand of the Campaign to End Loneliness (CtEL) states that one in 10 people over 65 feel chronically lonely all or most of the time. Age UK research shows that two fifths of all older people in the UK (almost four million) say that television is their main companion. Increasingly, organisations such as CtEL consider isolation as having a seriously damaging impact on health. CtEL’s website says a lack of social connections is “a risk factor for early death”.

Through Create’s collaborative creative activities, led by its professional musicians Tim Keasley and Merit Stephanos, creativity:revealed gave older people the opportunity to form new friendships, develop new skills and grow in confidence and self-esteem. The project culminated with a closing ceremony including speeches from Create’s Chief Executive Nicky Goulder and Jewish Care’s Chief Executive Simon Morris. The group performed four songs that they had written and arranged in collaboration with Create’s musicians. 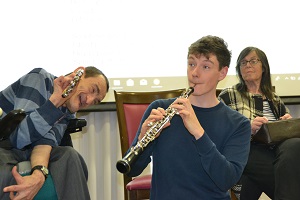 Jennifer (not her real name), who attended the creativity:revealed workshops, said: “I loved everything about the music workshops. I love the singing, the melodies, the instruments. As a child I learnt the piano, but then the war broke out and I never had a chance to take it further but it is great to play now in the workshops. I would love to do this again.”

Create’s Co-Founder and Chief Executive Nicky Goulder said: “Collaborative creativity can make a really positive impact on people’s wellbeing, providing a supportive outlet for emotions and a meaningful activity through which people can socialise. We’re delighted that creativity:revealed is providing older people at this very special centre with a valuable creative and social outlet. The performance today was joyful and vibrant.”

Simon Morris, Jewish Care’s Chief Executive, said: “, “One of our aims when we built The Maurice & Vivienne Wohl Campus was to promote well being by creating a community with access to a whole range of meaningful experiences in their everyday lives. After seeing today’s celebration it is clear that Create’s project has achieved this, bringing joy, creativity and new friendships to everyone involved.”