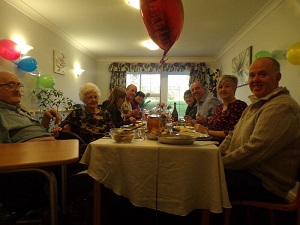 A resident at Blandford Grange care home in Blandford Forum has celebrated his 62nd wedding anniversary, with a special lunch held at the home.

87-year-old resident Harold Wallis married his wife June in Blandford Parish Church in 1956 and the couple have lived in Dorset all their lives.  Harold, originally from Tolpuddle, was with a friend when they met June and her sister Jean off the work bus in Blandford for their first date, going to the Palace cinema  in the town.  Soon June became a regular pillion passenger on Harold’s Royal Enfield motorbike.

The couple started their married life in Hyde, Bere Regis, and then lived for a number of years in Winterborne Kingston before their move to Blandford.

Harold worked as a bread rounds-man, travelling around the Dorset villages delivering bread and groceries for Mothers Pride.  June worked as a dinner lady at the Blandford school. 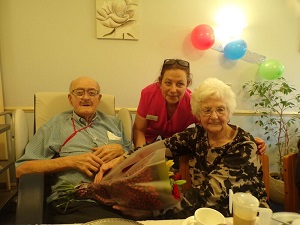 They had four children – Gordon, Christine, Andrew and Mandy, who all still live locally – and now have 11 grandchildren and five great-grandchildren. Harold moved to Blandford Grange in June 2017 and is visited regularly by his wife who lives nearby.

They celebrated the special occasion on Sunday 11th February and were joined at the home by family members who enjoyed an anniversary lunch with them.

Home Manager Deborah Davies said, “It was wonderful to be able to help Harold and June celebrate their very special anniversary, surrounded by fellow residents, family members and friends.

“They have clearly enjoyed a very happy life together and I would like to wish them all the very best from everyone at Blandford Grange.”