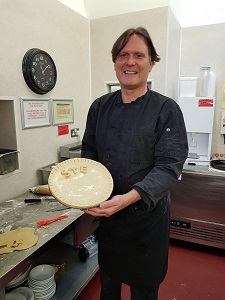 This month, alongside the rest of the nation, Milford House Care Home in Belper celebrated British Pie Week, with the residents picking a firm favourite for the kitchen to serve up.

Staff at Milford House got talking to the residents to find out what pies they would like to see on their plates over the course of the week and the catering manager came up with a tasty menu. On Thursday there was a choice of steak and onion or welsh dragon pie. Friday was sweet pie day and everyone tucked into hot apple and forest fruit pies. Saturday saw the overriding favourite dished up and no second choice was needed as residents all wolfed down their steak and kidney pie.

The care group’s catering manager Peter Radford said, “The residents all went for the more traditional pies. The average age here is around 85-87 and they still love the classics they grew up with. The most popular choice was steak and kidney, this preference for tradition is evident even on a daily basis, with the old favourite meals always being quick to go.”

So how does this compare to the rest of the nation? According to Awareness Days UK the nations favourite three pies are: cottage pie, fish pie and shepherd’s pie. Steak and kidney is on the list but right down at number nine.

Peter went on to say, “It will be interesting to see what type of pies we will be cooking in five years’ time, as the average age of residents changes I think we will see some more well known modern day dishes making an appearance on the menu here at Milford House.”

British Pie Week has been running since 2007 and takes place during March. Milford House finds taking part in these national days helps engage the residents, especially when it involves food as it gives everyone something tasty to look forward to.