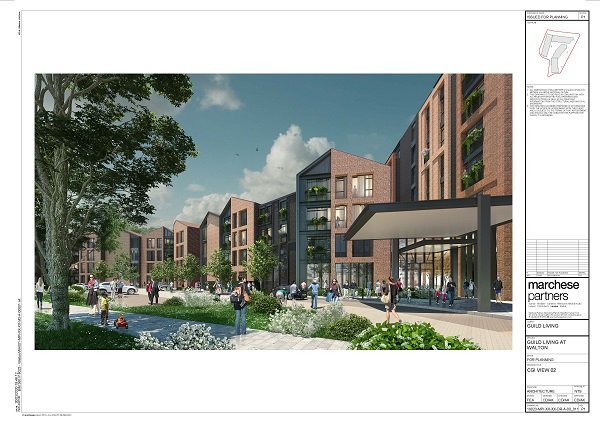 A new later living community with multi-purpose spaces and intergenerational facilities is coming to Walton-on-Thames, thanks to an appeal won by award-winning planning consultancy, Nexus Planning. At 222 units, it is one of the UK’s largest extra care developments permitted to date, in a town centre location.

On behalf of Guild Living and Legal & General, the appeal was upheld last week, following an inquiry held in March 2021. The high quality of the design by architects Life3A (formerly Marchese Partners) was roundly endorsed, with the later living development cited by the Planning Inspector as creating “an attractive and welcoming place to live, work and visit”. The appeal decision recognises the economic and job creation benefits of the scheme and will free up under-occupied family homes for younger families.

This scheme will deliver 222 units of extra care accommodation for around 350 people in Walton-on-Thames, many of whom will come from the local area. There will be 196 self- contained 1, 2 and 3-bedroom homes, plus 26 smaller care suites providing a higher level of care and transitional accommodation.

The development will provide a gym, restaurant and multi-purpose spaces open to the public. This will be key in promoting the intergenerational activity within the scheme and creating the opportunities for residents of the scheme to engage with the wider community. The scheme will also deliver a generous new area of public realm through the centre of the site, creating a new link between the town centre, Ashley Park and the Walton-on-Thames Cricket Club.

The landscaping proposals reflect the historic connection of the site (personnel of the New Zealand armed forces were hospitalised in the area after World War 1). The development will also incorporate several important trees, such as mature Oaks and London Plane trees into the design, as well as providing a new ecological corridor running along the park side of the site.

Tim Spencer, Associate Director of Nexus Planning’s specialist Later Living Team, comments: “At Nexus Planning, we are passionate about developments that play a critical part in improving the health and wellbeing of the older generation. We are particularly pleased that the broad range of significant benefits of this later living scheme have been recognised by the Planning Inspectorate, and we hope that this approval will pave the way for further developments that which will allow more people to live their best lives in their retirement years.

“This development will provide a fantastic place for residents to live and thrive, whilst enabling them to remain connected with the broader community, the town centre as well as the natural environment. We look forward to seeing this later living community play an integral part of life, for people of all generations, in Walton-on-Thames.”

Why this scheme is needed

Tim Spencer continues: “The UK has a rapidly ageing population. Alongside this, there are significant increases in frailty and dementia in the older generation. It remains the case that many people continue to live in accommodation that is no longer appropriate for their life stage, and this sometimes leaves them unable to continue to live comfortably and thrive, as they grow older.

“It is of great importance to locate extra care communities in the right areas, where residents have access to town centres and high streets, so that barriers to economic engagement are removed. It is also very important to locate retirement communities in healthy urban spaces with accessible parks and recreational spaces. The Guild Living site is ideally located on the edge of the town centre, next to Ashley Park and near to the Thames Path.”

Nexus Planning has a specialist Later Living Team and has a long track record of delivering planning permissions around the UK in the sector, ranging from Extra Care and Assisted Living Developments to specialist dementia homes and care homes. Nexus Planning’s regional offices in London, Manchester and Reading have experienced, dedicated, later living teams, supported by in-house research and analytics capabilities, delivering a range of later living developments around the country.

Nexus Planning is an award-winning, independent consultancy operated and managed by Chartered Town Planners. Its highly skilled team of planning and regeneration consultants provides market-leading advice to both the private and public sectors. Nexus Planning was established in 2013 and won RTPI Planning Consultancy of the Year 2020.