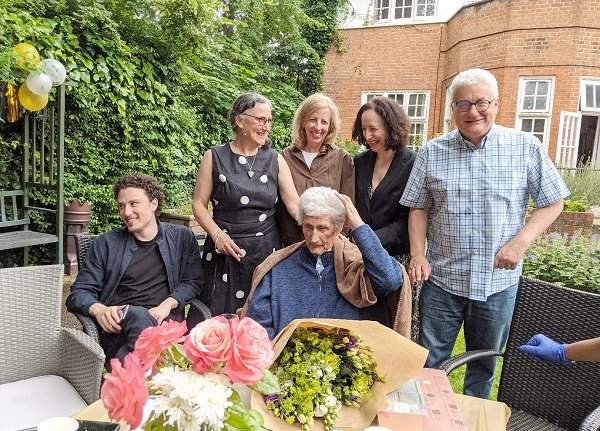 A Swiss Cottage-based care home resident has celebrated his 100th birthday with a spectacular party in the home’s gardens, attended by family and friends.

Ludwig Berlin, who resides at Rathmore House, turned 100 on Tuesday 29 June. On Saturday, 26 June, he was treated to a medley of his favourite Frank Sinatra and old army songs, performed by professional musician Franz Black. An ice cream van also came to serve cold treats to party attendees, who also included several of the home’s 20 residents.

The achievement of reaching 100 is the latest milestone in Ludwig’s fascinating life. Born in Nuremburg, Germany, Ludwig fled the country aged 18, shortly before the outbreak of the Second World War, on account of his being Jewish. After some time in Paris and southern England, he was interned on the Isle of Man for a year.

In the latter part of the war, Ludwig spent time in No.9 Commando and then Commando X Troop, a troop within the British Army comprised mainly of German and Austrian Jews.

In later life, Ludwig worked with the Anne Frank Trust, conducting some school visits to share his story. He made a number of return trips to his old home of Nuremberg, Germany – most recently in 2015 – to speak to his old school about his experiences. He was more recently an active member of the West Heath Lawn Tennis Club.

Ludwig Berlin with his congratulatory card from Her Majesty the Queen

Ludwig’s daughter, Anita Berlin, said: “He regularly tells me that ‘I can’t believe I got here’ and ‘I have been truly fortunate’. I think it really influenced his character, knowing that he survived when so many Jewish people didn’t.

“Being banned from taking exams at school (a policy enforced by the Nazis against Jewish children) may have actually helped his longevity, as he developed a passion for fitness that he has held throughout his life!”

Edith Mansfield, care home manager at Rathmore House, said: “Saturday’s party was a wonderful way to mark Ludwig’s 100th birthday. Despite his age, he remains full of life and it was amazing to have family members and other residents alike join in the fun.”