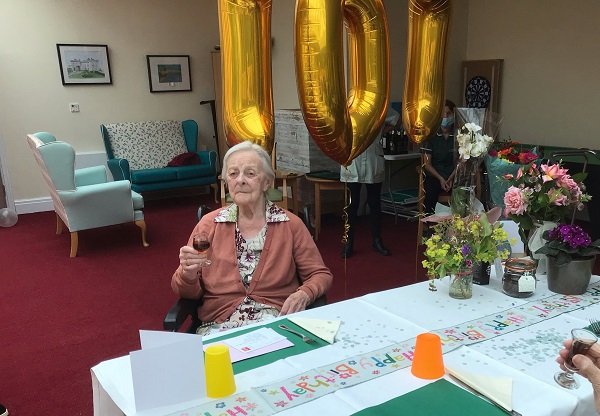 Eve Farnell, who lives at The Hall in Thornton-le-Dale, has celebrated her 101st birthday, 80 years since she supported pilots during the Battle of Britain.

Eve, who was born in Hertfordshire and grew up in the village of Ashwell, until the beginning of the Second World War, has lived at The Hall care home for around nine years. She celebrated her milestone birthday in style with friends and staff at home.

Serving in the Women’s Royal Air Force during the Second Worlds War, Eve was stationed in Sandwich, as an aircraft expert, who typed everything spoken by fighter pilots during the Battle of Britain.

She met her husband John, who also served in the RAF, and the couple married in 1944. After the war, they relocated to Westow, before eventually settling in Huttons Ambo where they lived for more than 40 years near their daughter, Ann, and granddaughter, Lesley, who live in Ellerburn.

Eve is a keen gardener, indoor bowls enthusiast and dress maker who joined the Malton & Norton Art Society in the early 1970s.

Nicky Beach, home manager at The Hall, said: said: “We are delighted to have been able to help Eve to celebrate this incredible, milestone birthday.

“Eve is a wonderful part of the The Hall family, like all of us, she loves a good party!

“Eve has led an extraordinary life, and here at The Hall, we take time both to reminisce and support our residents to make new memories.”

Lesley Beale, Eve’s granddaughter, said: “Thank you everyone at The Hall Care Home for making the day so special!

“It was wonderful for Mum and I to be able to see Grandma today.”

The Hall is a converted 17th Century home of landed gentry, which now serves as a 54-bed residential care home. It is rated “good” by the Care Quality Commission.