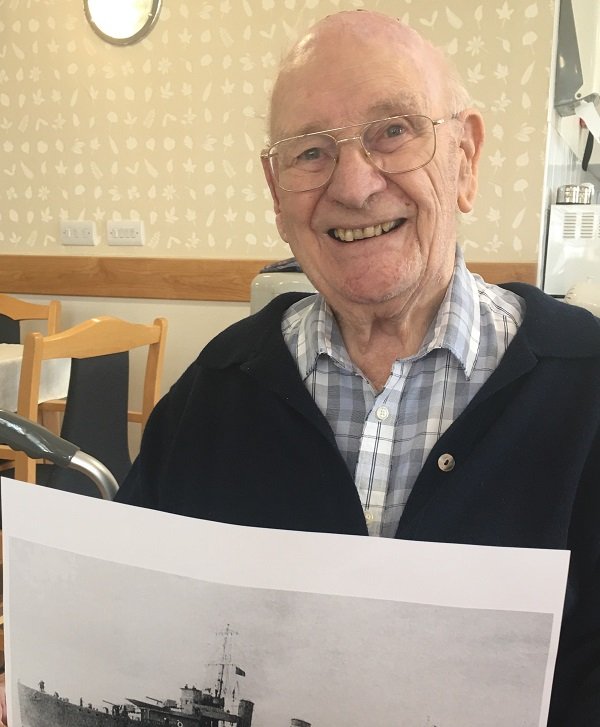 Before the pandemic residents at Etheldred House Care Home in Histon enjoyed going to “Friends of Histon & Impington” which is a village charity that aims to help and support wellbeing, mobility, sport, and recreation for those who live in the community.

“Friends of Histon & impington” did not want to disappoint their community so they set up zoom sessions every other week. These are very popular, and the residents really look forward to the meetings.

Recently they learned that Norman was a young doctor when he served the Royal Navy during WWII. They surprised Norman by getting up a picture of his old ship, HMS Woolston on the TV Screen!

At 17 Norman joined the Navy, it was not his ambition but explained that when a war was on you had to go and fight. Life seemed exciting at the age of 17.

He went to Chatham Docks and did not really think too much about it. He was looking forward to whatever life was going to bring to him and eager to take on any new challenges.

Norman says, looking at the positive side, I got to travel around the world on other people’s expenses, travelling everywhere except the Far East.

Norman surprised himself and remembered his number for the Navy which was C18877 and said there was 240 men on the ship. The food was excellent, but it was even better when the admiral was on board. He also enjoyed the tot of rum that they were given every day at midday.

He met his future wife Geraldine through his oldest brother as he was engaged to Geraldine’s sister. They married when he was 18 at Green Leaf Baptist Church, Walthamstow, Essex. Norman remembers how important his leaves were so he could hold and hug his dear wife, Geraldine that he missed so much. Time spent together was very precious as you could get called back to the ship at any time, as war waits for no man.

Norman was in the Navy for five years and said he breathed a sigh of relief when he left.

Norman was a teacher for Sir George Monoux Grammar School and thoroughly enjoyed his time teaching. After he advised upcoming teachers giving them his breath of experience in the teaching field.

He always had a passion for music and sang in the church choir. He was picked out to sing in the London Church Choir, which he was very proud about. Norman was a soprano and sadly says he can not hit the high notes anymore. He said he would need a step ladder to get to the high notes now. Norman sang in front of Anne, Princess Royal when she came to see the choir.

Two of his favourite singers are Pavarotti and Enrico Caruso who Norman believes is the best tenor singer in the world.

When Norman was asked what age, he would like to go back to he said 17 because he was very spritely at that age, happy and carefree.

Norman’s advice to the young people is to be happy. Norman said he is happy most of the time and life is so much better if you are happy.

Norman enjoys life and loves to be part of the activities at Etheldred and says it is a wonderful home to be in. Especially as he loves tea and says he is well looked after, and the staff make an excellent cup of tea.

Norman was handed over some pictures and information about HMS Woolston which he really appreciated. He saw straight off that HMS Woolston was also used in first world war, which he was not aware of. Norman is now enjoying a wonderful cup of tea reading all the facts about HMS Woolston, where he said he has many memories to look back on.