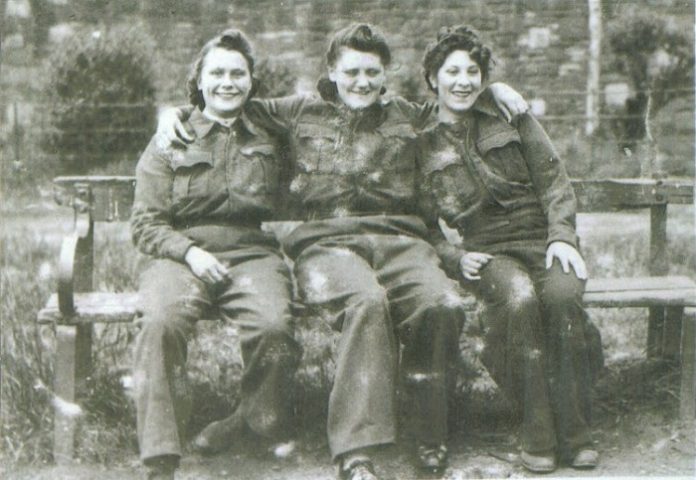 A Women’s Auxiliary Air Force veteran who fixed Spitfires and raised barrage balloons during the blitz has met her great-great-grandnephew for the first time to celebrate her 100th birthday.

Kitty Taylor was able to meet seven-month-old Rupert Marshall through a Covid-secure screen and reminisce about her incredible life with two of her nephews at St Mary’s Court care home in Braintree after more than a year of restrictions due to the Covid-19 pandemic.

Kraig Donald said: “My auntie’s an amazing woman who has seen so much over 100 years. Although she has developed dementia, she remembers much about World War II and the vital role she played.”

Kitty was born and raised in West London and was 19 when war broke out. She joined the Women’s Auxiliary Air Force upon its formation and was assigned to raise barrage balloons over Borough High Street to stop the advance of German bombers during the blitz.

Kraig said: “She remembers vividly running across London Bridge during an air raid as flak rained down over the city. During the day, she’d be on the rooftops spotting for planes. She’s an incredibly brave woman.”

Kitty was transferred to Liverpool to train other women in barrage defences during the Liverpool Blitz and became recognised for her technical skills, so was sent to Oxford to help fix Spitfire and Mosquito aircraft for the rest of the war.

Kraig said: “She’s always been a little annoyed that the women of the WAAF didn’t receive medals or recognition for their hard work, but she was so proud to have served her country.”

Kitty travelled all over the world after the war, including to Germany to lament over the devastation, and worked in the Putney Telephone Exchange until her retirement in the 1980s. She then moved to Sible Hedingham, Essex, with her husband William Taylor to be closer to Kraig, whose father served on the nearby US airbase, and his family.

Following William’s death, Kitty lived on her own until 2018 when she moved to St Mary’s Court care home.

Julia Clinton, CEO of Sonnet Care Homes, said: “Current social distancing rules allowed Kitty to hold hands with Kraig and see his brother, Kier, and the son of their niece through a Covid-secure screen, which made her very excited. She was also over the moon to receive a letter from the Queen.

“We are blessed to have Kitty as part of the St Mary’s Court family and are pleased we were able to help her celebrate reaching 100-years-old with those close to her.” To find out more about dementia, specialist and nursing care at St Mary’s Court, call 01376 328600 or email info@sonnetcarehomes.co.uk