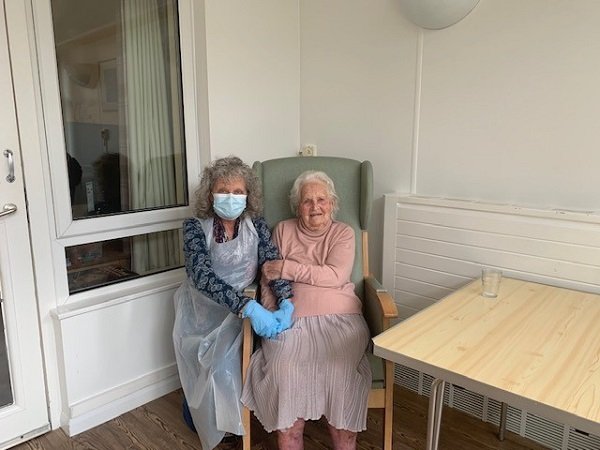 With the recent relaxing of lockdown restrictions, perhaps nobody is looking forward to resuming contact with loves ones more than thousands of care home residents up and down the country.

Many older people been locked down in their homes and shielding for many months before, meaning that social contact has been extremely limited over the past year. The mental health repercussions of being cut off from their family and friends has been devastating for some.

However, the benefits of reconnecting again are just as clear. At Abbeyfield House in Bramhall, resident Bettie Lovell, 96, has recently been able to hold hands with her daughter Pamela after many months apart.

As a mother of four, with nine grandchildren and ten great-grandchildren, Bettie says the separation from her family has been “terrible”.

“I have missed them so much,” she said. “We’ve been talking on the phone and video-calls but it’s not the same.

“I’m overjoyed that Pamela is able to come and visit me again, and hopefully my other children, who live further away, will be able to make the trip soon, since we are now allowed more than one visitor.”

Bettie has lived with The Abbeyfield Society, a charity which provides communal housing and care for older people in the UK and internationally, for a number of years, after spending a large proportion of her life living on the South Coast and a few years in South Africa. Bettie has been active all her life, frequently swimming in the sea well into her 80s. However, when it became clear she required extra support, she followed a recommendation from her daughter and moved into an Abbeyfield supported living scheme in Stockport, before relocating to the Bramhall care home when her needs became more acute.

Abbeyfield has provided a wide programme of activities to alleviate boredom and loneliness for their residents during lockdown. However, having spent most of the winter indoors, including being in and out of hospital, Bettie is looking forward to the weather getting warmer. She used to spend a lot of her time outdoors doing the gardening and building, including a set of steps and a wall – as she puts it, “many jobs other women wouldn’t normally do.” Nowadays she is not able to take on such physically demanding tasks, but she still enjoys “sitting in the sun and the fresh air” in Abbeyfield House’s beautiful garden.

Bettie has also been a keen fundraiser all her life. Starting off raising funds for the blind from a young age, her achievements since have included raising the funds to establish a bowls club on the South Coast, which she secured through fundraising events and local media campaigning, and helping to set up a school for disabled children in South Africa.

“I’m eager to explore the local community in Bramhall when lockdown is over,” she said, “and I look forward to seeing which charitable organisations could benefit from my help and experience.”