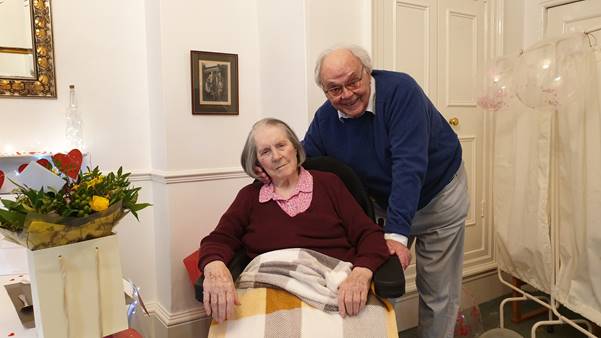 This is the magical moment when Patricia and Peter Layhe were reunited after months apart to celebrate their 65th wedding anniversary.

The staff team at Tabley House nursing home in Knutsford, Cheshire sprung into action after discovering resident Patricia’s special wedding anniversary was coming up, and hosted a private lunch for the Patricia and husband Peter to give them a day to remember.

Peter, 90, arrived with a bouquet of red roses for Patricia, 87, and staff who lined up to congratulate the pair admitted they cried tears of emotion at seeing them together.

The visit followed Covid-19 guidelines. Both Peter and Patricia had undertaken Covid-19 testing protocols and the home carried out a risk assessment to ensure other residents were safe.

With restaurants closed because of the lockdown, Tabley House staff transformed a visitors’ room into a romantic restaurant, decorating the table with strings of lights and hearts, while the catering team prepared a three-course lunch for the couple. Peter and Patricia also blew out the candles on a homemade anniversary cake and they were presented with a card and a bouquet of flowers from the Tabley House team. The day was capped off with a video call from their children.

Afterwards, Peter, of Wilmslow, Cheshire said: “We were both blown away by kindness of the Tabley House team in making our day such a special one. I want to offer them my sincere thanks for a memorable wedding anniversary. It made for a delightful lunch in most difficult times.”

Patricia and Peter met at the local conservative club when Patricia was completing a City and Guilds evening cookery course and used to bring her ‘goodies’ to the dance each Thursday evening.

Peter said he fell in love with Patricia almost at first sight, and they married on 10 March 1956. At the time, Anthony Eden was Prime Minister, Manchester City was about to win the FA Cup with a 3-1 win over Birmingham City and later that month Bill Haley and His Comets would top the UK charts with “See you Later, Alligator.”

Peter said: “Patricia had many strings to her bow. She was a policewoman for a time, she opened the Citizen’s Advice Bureau in Macclesfield and also helped to create some of the Toy Libraries in Scotland. She was also a keen photographer and was awarded Associate Distinction by Royal Photographic Society. Most of all she is a fantastic wife and mother to three children; a grandmother and now a great grandmother as well.”

After Patricia moved to Tabley House in 2019, Peter visited almost every day before the pandemic. But during the lockdown and with visitor restrictions in place at the house since last March, they have had to rely on Zoom sessions to share their news and spend time together.

Karen Lynskey, Registered Manager at Tabley House said: “We had a lovely day celebrating Patricia and Peter’s milestone wedding anniversary. We are so pleased that we could arrange for them to see each other on their special day, and it made us very tearful. They are very loving, supportive of each other and an inspiration to us all. We are honoured to have been part of their big day.”

“We wanted to do all we could to make sure their special day is memorable, and the couple could celebrate the milestone together in a safe environment. We all wish them many congratulations.”

Tabley House, run by Cygnet Health Care, is a nursing home offering 24-hour nursing care for people with a range of different needs. The home is rated ‘Good’ by the regulator, Care Quality Commission.