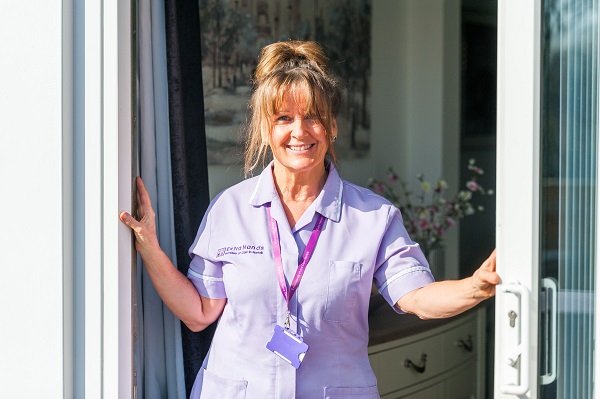 Two carers have been praised for “going an extra 10 miles” for their service users and being the sort of people “who make the world a better place”.

The awards were launched last year after the award-winning, family-run business was inundated with stories from our service users of carers going the extra mile during the Covid-19 pandemic.

Debbie won lavish praise from her more-than-satisfied clients. “If the world had more people like Debbie, it would be a far better place,” said one nomination.

Another was equally glowing, praising her for her dedication to duty for Extra Hands, which has been operating for nearly three decades.

“Debbie lights up my life with her cheerful soul. She is gentle, patient, kind and very funny,” the nomination read. “She lifts my spirits on a bad day, is supportive and understanding about mental health and no task is too small for her.”

Debbie said to be nominated and rewarded was a wonderful surprise after such a demanding year for her and her colleagues at Extra Hands, which supplies a wide range of care services, including a wellbeing check service that provides short visits to check up on care users when friends and family are unable to make the visit, giving everyone peace of mind.

“The pandemic has put a lot more pressure on us carers and we’ve had to take on more responsibilities, especially for service users, so we’ve had no option but to carry on,” she said. “The main thing we have to do is make sure that they’re safe, and that they feel alright.

“There are a lot more things to do now, and with family not necessarily being able to visit, we have to liaise with them as well, but I think the public in general have a much better understanding of what we as carers do.

“There have been quite a few times when I’ve been out on my rounds, and when people have seen me get out of the car, they’ve said thank you for what we’re doing. That’s so nice to hear, it really helps.”

Debbie, originally from Essex, has been with the family-run business for two years, having previously worked in a care home, and works from Extra Hands’ Heacham office, which has been rated outstanding by the CQC.

“You don’t get the level of one-to-one interaction in a care home that you do with home visiting, so that’s what attracted me to working for Extra Hands, and I couldn’t have chosen better,” she said.

“This is by far the best place I’ve worked – nothing is ever a problem and they’re such a good company in the way they train and treat you as staff. That really makes a difference – if we’re happy when we go out to work, then our clients will be as well.”

Debbie was bashful about being nominated by service users, insisting she was just being professional.

“People say I’m kind, and that I’m always willing to help, no matter what I ask – I tell them it’s not a big deal, we all do that!,” she said. “Even if it’s a last-minute thing as I’m going out the door, I’ll always stop and do whatever needs doing so I know I can walk away with a smile on my face and the knowledge that I’ve done everything I can to set them up for the day.

“It was so nice to be nominated. People always tell me that I’m a happy smiley person, and that they’re happy to see me, so I really appreciate it that they said it to someone else too, and I ended up winning this award.”

Meanwhile, Lorraine has been with Extra Hands for two years, having previously worked for Essex County Council. She works from Extra Hands’ Broadland office, near Norwich.

“I don’t think anyone outside the care industry knows how important domiciliary care is,” she said. “The last year has made everyone evaluate their jobs more, and see what they could be doing to make a difference. But I wouldn’t change my job for all the tea in China – it’s not about financial reward, caring is what I do.

Lorraine said her approach is simple: “treat the service user as another person, not someone with any vulnerability or disability, go into their house with a cheerful smile, and if you see something that needs doing, do it. I always like to walk out thinking that I’m leaving their house how I would leave my own.

“Go in with a positive attitude and reassure them,” she continued. “Handling the nervousness of some care users, and trying to make them feel as safe as you can, has been a big deal in the last year.”

As well as receiving a pat on the back from the company, based on customer satisfaction, Lorraine was eager to praise Extra Hands for the way it treats its own staff, through things like the GEM award.

“It’s really nice to be acknowledged for the work I do,” she said. “You feel appreciated for your contribution, because in a lot of jobs, you’re just a job number, but with Extra Hands, you feel you are a person and they do appreciate you. I moved up to this part of the world two years ago, and I’ve found Extra Hands to be a really good company to work for.

“Whenever I’ve had any problems they’ve been there for me and supported me, personally as well as in my work. They don’t just look at you as an employee, they always support you too. It’s important to feel you’re a valued member of staff.

“This award is for employees going the extra mile, but I feel that the company goes the extra mile to support employees. That makes such a difference to how you do job.”

One of Lorraine’s nominations said: “Lorraine goes beyond the call of duty, she does anything to help me out, I would have her everyday if I could and I would vote for her 1000 times.”

“My friend has never had a carer like her before,” said another. “Lorraine is a fantastic carer, who goes an extra 10 miles, she is kind, never impatient and anticipates my friend’s needs.”

Malvern resident reunites with her son as lockdown restrictions ease

One of Northamptonshire’s oldest residents celebrates her 105th birthday